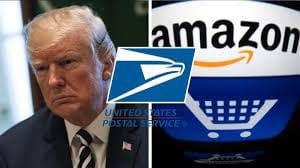 In a series of moves reminiscent of the Nixon administration’s “Enemies List,” president Donald Trump has held a number of meetings with Postmaster General Megan Brennan personally pushing Brennan to double the rates the Postal Service charges Amazon.com

According to multiple sources, Brennan has so far resisted Trump’s demands. In multiple conversations occurring this year and last, the PG has tried to explain that “these arrangements were bound by contracts and must be reviewed by a regulatory commission.”

Brennan and Trump have reportedly met at the White House about the matter several times, beginning in 2017. Yet, the meetings have never appeared on the president’s public schedule.

President Trump has latched on personally to Amazon CEO owner Jeff Bezos, who owns the Washington Post in addition to his leadership role with Amazon. By all accounts, the president’s actions constitute what can only be described as a blunt act of retaliation that uses the available federal machinery of the U.S. government to personally punish someone he perceives to be a political adversary.

Within the last month, the Wall Street Journal has published that “the president has turned what were sporadic and private criticisms into a sustained volley of tweets against [Amazon], often causing stock market fluctuations.”

The question at hand:  Is the U.S. Postal Service making or losing money delivering Amazon packages?

Analysts have estimated that Amazon uses the Postal Service for 40 percent of its shipping and that the per-package cost works out to roughly $2, or about half of the standard rate charged by other big shippers.

One reason the Postal Service is willing to give Amazon such a big discount is the huge volume of deliveries that the contract guarantees — a key factor in business with high fixed costs.

Another is that Amazon performs a fair amount of the shipping work itself, arranging the packages by Zip code and carrier route and dropping them off on pallets at one of 20 Postal Service distribution centers across the country.

In its role as the government-designated postal monopoly, the Post Service is already required to stop by every home, business and rural post box six days a week, and already had the workforce and infrastructure to do that. In that context, the additional — or “incremental” — cost of delivering the additional Amazon packages is modest.

Looked at from the standpoint of incremental revenue (huge) minus these incremental expenses (modest), the Postal Service could very easily have come to the conclusion that, even at $2 a package, the Amazon contract was likely to be highly profitable.

The Washington Post analyzed that the way the Postal Service calculates its package-delivery costs is to start with the incremental costs directly attributable with package delivery, or any of its “competitive” business lines, and then add an “appropriate” surcharge to cover common, or institutional, costs.

But a number of analysts, including more than a few hired by UPS and FedEx, have argued that the common charge assigned to the Amazon contract was way below that average, and way below what it should be to keep competition fair. The correct charge, they argue, would add about $1.50 to the calculated cost for the Postal Service to deliver a package.

So what would happen if Trump got his way and the Postal Service was required to charge that much for a package?

In the end, what you would get would be a death spiral that eventually would force Congress to shut down the Postal Service and sell it off to the highest bidder.

The reality is that the modern Postal Service has been set up to be a hybrid — part government agency with a mission of universal service, part private enterprise with a mission not to lose money, overseen by an independent regulator whose job is to make sure that the two missions are held in proper balance. Unfortunately, that is a reality that is way too complicated for our president to understand.” [24×7]