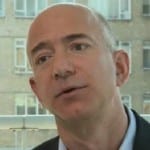 “We love to invent, we love to pioneer, we even like going down blind alleys,” remarks Jeff Bezos when asked what Amazon is “all about” these days. After pioneering online retailing, Amazon has expanded like a hot air balloon, ascending above the stratosphere of e-commerce.

The panoramic view from above spans all types of goods and services on the e-tail landscape. In the digital realm: Web and mobile apps, music and movies, digital games and software, cloud computing, and finally, the computer hardware market.  Amazon is “all about” giving users access to every form of media content vis-a-vis its eReaders and tablets. It all comes back to where the journey began  — the written word.

Indeed, if any Internet brand can lay claim to true vertical integration with its customers’ buying habits or purchase patterns, it is Amazon. It could practically patent the word “ecosystem” as it has “OneClick.”  In fact, Amazon is so overly-committed to how people use their new tablets, they do not wish to make a profit on the devices. “We sell the hardware at cost,” Bezos admits. “We want to make money when people use our devices, not when they buy them.”

This fundamental, yet equally radical, business concept is that Kindle Fire users buy books, apps, movies and music in large enough quantities to support Amazon Tablets as distribution devices. Unlike Apple, Amazon’s margins are as paper thin as its display screens, but it’s a volume business— the sheer number of goods sold should keep revenues flowing and investors happy.

Of course, not everyone is happy with the huge power Bezos and Amazon wield over the publishing industry. Not only are independent bookshops bordering on extinction, but the biggest and best bookstore in countries across the globe is a company headquartered thousands of miles away in Seattle. That did not not stop the BBC from naming Jeff Bezos the most powerful and influential CEO in the technology world.

Is Amazon’s vision of the future of books exclusionary?  According to commentary in The Nation “It’s easy to imagine Amazon muscling existing publishers out of the picture altogether and inviting authors and agents to deal directly with them.

And yet Amazon gives $1 million a year, in grants of about $25,000 apiece, to a wide range of independent literary journals and nonprofit organizations, including the Kenyon Review, the newly launched online Los Angeles Review of Books and even One Story, the nonprofit literary magazine devoted to the short story, which recently celebrated its tenth anniversary by honoring Ann Patchett, an outspoken critic of Amazon’s book business practices and a co-owner of an independent bookstore in Nashville. Amazon’s contributions outstrip by a large factor any advertising dollars sent my way by traditional publishers during the nearly nine years I ran the Los Angeles Times Book Review.”wrote Steve Wasserman.

Bezos replies, “When we bring new things to the market and consumers like them it does create change,” he said, “and if you’re an incumbent change is scary but you have to lean into the future and embrace change.” 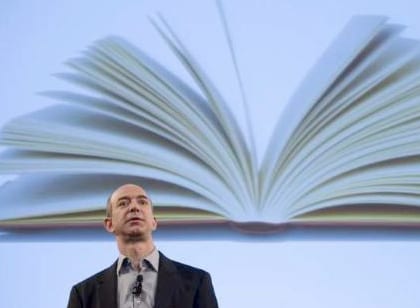 The arrival of Amazon Singles facilitates a bottom-up way for virtually everyone with an idea to self-publish their own booklet, chapter, or paper in the Amazon Singles marketplace, bypassing publishing houses and bookstore shelves. Amazon suggests a range of 99 cents to $4.99 for a Kindle Single.

This has very much changed my thoughts about possibilities for ideas I get that previously I would have had to categorize as either a magazine story or a book.

What about the future of reading itself?

“We like stories,” says Bezos. “I don’t think that any amount of eBook technology is going to change the fact that we humans like narrative. And so I think that linear narrative, where somebody has really put a lot of work into guiding us along in a great story—a great storyteller, that’s what they do. I think that’s going to stay the same,” he says.

Amazon added Audible to its lair in 2008, adding the Web’s leading publisher of audio books to the tune of more than 100,000 titles, many announced by famous voices.  Bridging audio with text, Amazon has integrated the “read to me” vs.” read it myself” paradigms.  Now, when you use a Kindle Fir HD to burchase a book from Amazon you also get access to the companion Audible version and can switch back and forth between the two.  For example, read a chapter of a new book before clicking off the light for slumberland, and you can opt for the device to continue to read to you in the dark while you drfift off to dreamland,  It’s every grown-up’s “rekindled” version of the ‘bedtime story.”

One interesting note is that Amazon has found people who get the 3G version of the Kindle increase their reading even more than those who get the wi-fi only version—probably because the 3G makes it that much easier and more frictionless to buy e-books wherever they are. Bezos compares it to one-click shopping as an example of an incremental improvement that drives a huge amount of additional sales. Until Kindle, nothing in the digital era really made it easier to read long-form. People didn’t want to read long-form on their laptop. We tried that actually. We offered eBooks to people to buy as PDFs and other ways. You needed an electron microscope to find sales. Nobody wanted that.

Bezos takes it as “an article of faith” that “if people read more, that is a better world.” His familiar refrain is that Amazon was built by “missionaries” rather than “mercenaries”, trying to change the world because they believe in what they’re doing instead of for the money.

“What I hold onto and what I tell our folks here at Amazon is, if you’re going to invent, if you’re going to do anything at all in a new way there are going to be people who sincerely misunderstand, and there are going to be also self-interested critics who have a reason to misunderstand. You’ll get both types. If you can’t weather that misunderstanding for long periods of time, then you just have to hang up your hat as an inventor. It’s part and parcel with invention. Invention is by its very nature disruptive. And if you want to be understood, if it’s so important for you to be understood at all times, then don’t do anything new.”

If Jeff Bezos hadn’t changed the world of e-reading,  sooner or later someone else would have come along to try and remove the sword in the stone, but history will attest it is Bezos who has transformed reading and books from his think tank in Seattle in the same way Steve Jobs transformed the music industry with the iTunes store. From the invention of parchment , manufactured from papyrus on the Nile delta, to the design and production of the hand-held e-reader in its present “Paperwhite” form in Seattle, such a milestone is not simple evolutionary, but revolutionary. [24×7]