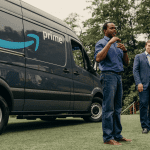 How to get packaged goods from point-A to point-B is the top logistical challenge facing Amazon’s operations specialists as they peer 15-years into the future of what tomorrow’s delivery services might become.

Will it be by air? Amazon’s PrimeAir cargo planes are already cleared for takeoff while unmanned drones are in test-flight mode.
By sea? Amazon has expanded into ocean freight handling shipment of goods by the ocean to its U.S. warehouses from Chinese merchants selling on its site. The company has reportedly coordinated shipping of at least 150 containers since October.
Or will it be by land?  USPS and UPS are contracted, as is Fedex. Then there are outsourced Amazon Flex drivers who can make up to $25/hour performing deliveries in their own vehicles. And buckle up. A new breed in the Amazon fleet dubbed Amazon Delivery Service Partners (DSP for short) to be run by independent entrepreneurs will soon hit the highways and byways across America with branded trucks and uniforms in fleets of up to 40 trucks.
President Trump’s bellyaching about Amazon taking the U.S. Postal Service for a ride is so  — don’t wait for it — yesterday. Indeed, while Trump is trying to make life more difficult for Jeff Bezos by trying to reneg on Amazon’s deal with the U.S. Postal Service, Bezos and company are driving rings around the oval office by offloading package delivery (that might have potentially saved the USPS) to a new channel of fleet operators.

Dave Clark, Amazon’s senior vice president of worldwide operations, said the new program isn’t a response to the president, but a way to make sure the company can deliver its growing number of orders. “This is really about meeting growth for our future,” Clark said. He made the announcement in front of Amazon-branded van during a June 27, 2018 news conference in Seattle, which also highlighted $1 million fund to help cover startup costs for military veterans. 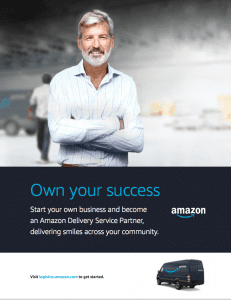 Driven by Performance —How Does DSP Work?

For a minimum investment of $10,000, a new transport partner will get access to a variety of business discounts Amazon has negotiated on their behalf, including leases of the Amazon-branded vehicles, as well as fuel, insurance coverage and more.
Successful owners can expect annual revenue potential from $1 million to $4.5 million dollars and a profit picture of $75K-$300K.
Amazon owners will operate 20-40 vans and have 40-100 employees. They will be fully responsible for hiring and developing a team of high-performing, hardworking drivers and provide consistent coaching and support for the team to ensure the successful delivery of packages in a 7 days/week, 365 days/year operation.
Amazon’s recruitment brochure says it will be offering three weeks of hands-on training including a one-week introduction to Amazon in Seattle, followed by two weeks in the field working alongside existing owners and drivers.
Applicants for Amazon Delivery Service Partners are asked to select their top three preferred locations.  Not all fifty states are being offered at roll-out but there are three options in the Puget Sound area.
The Amazon Flex program which lets drivers use their own vehicles is  currently available in Baltimore, Boston, Indianapolis, Long Island (NY), Philadelphia, Pittsburgh, New Jersey, New and York City
Amazon is also testing a new plan to pick up products from businesses that sell goods through Amazon and deliver that merchandise to its warehouses.  [24×7]