Three of the biggest names in business — Amazon, Berkshire Hathaway and JP Morgan — set the health care world tilting on its axis when the trio announced a co-venture with the noble endeavor of providing better, cheaper health care for their employees.

The intra-spective HR initiative is not yet being lauded as the prototype of a public health care solution. Yet, the connection between online access, personalization and product distribution with personal health data has been transformational — including apps that deliver stunning new diagnostic capabilities and the arrival of augmented reality to enhance the detection of illness and self-diagnoses.

The Economist magazine points to a pilot program in Sweden that gives citizens electronic access to their medical records by 2020, and over a third of Swedes have already set up their accounts.  Yet the early demise of programs like the Microsoft Health Vault and Google Health are inauspicious signals of American’s disinterest or incapacity to take health matters into their own hands.

The Harvard Business Review cites Amazon’s passion for rapid delivery (with or without your grocery products), and “passive data capture” as being integral to a new era of healthcare and lifestyle working together.

Heroic marketing efforts and test programs may hold the key. Alphabet recently launched a firm called Cityblock Health which plans to parse through the patient data of low-income city dwellers, many covered through Medicaid.

A key component of the next phase in Medicare reimbursement for doctors will reward physicians for providing patient education under MIPS, the Merit-Based Incentive Payment System. Now that the health records of millions of Americans have been digitized, there must be more to the middle-game than just logging into a HIPAA-compliant electronic portal once or twice a year to view test results. Perhaps the new triumvirate of Bezos, Buffett and Dimon can champion a new way forward. [24×7] 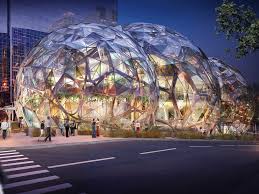 Negotiations are underway with the twenty finalists in the Amazon HQ2 Corporate Olympics with Amazon’s judging of a new corporate location harder to predict than Olympic figure skating in PyeongChang.

The Geekwire tech news service recently selected Pittsburgh, PA as its companion city to Seattle when deciding where to expand its editorial operations. Do they know something the rest of us can only guess at? The “Steel City” with the three rivers has an outstanding academic footprint at Carnegie Mellon University and its resurgence as a rust belt city proves its resiliency.

The pundits at Seattle24x7 have employed a more political barometer. For a company like Amazon that appears to want to dominate nearly every business sector save travel and real estate, the issue of anti-trust has to loom largest as the greatest threat to the company’s existence. This includes expansion into health care (see above) which, at 18% of U.S. GDP, Amazon views as fertile ground for expansion. It is also deciding how to best pursue the market for pharmaceutical distribution,

To us, that points to a headquarters’ city of influence with massive employment in or around the nation’s capital, preferably one with two strong, pro-business senators to protect Amazon’s commercial interests.

Three bids from the Washington, D.C., area made the final list for Amazon’s second headquarters, making it the highest representation of any region that bid for Amazon HQ2.

Chairman Bezos does own the Washington Post and a lovely home inside the “beltway” that has been described as the largest home in D.C.  Amazon’s cloud service AWS also has a huge data center presence in the northern Virginia region.  Are we looking at a new kind of capital formation strategy for the A-listers?

The remaining 20 HQ2 candidates are: