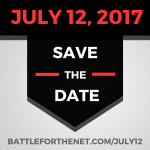 July 12th, 2017 may live in history as the day when the world’s biggest Internet companies and activist groups came together to protest the FCC’s proposed rollback of Net Neutrality protections. Amazon, Expedia, Google, Facebook, Twitter, Spotify, eBay, even Uber and Lyft have weighed in, as have groups like Mozilla and the ACLU among many others.

According to reporting by The Verge, Twitter announced in a blog post on Tuesday that “Internet service providers are obligated to treat and transmit all bits equally, regardless of origin, content, or destination. It’s encouraging users to use the hashtag #NetNeutrality on its platform.

“Net Neutrality is foundational to competitive, free enterprise, entrepreneurial market entry… anyone with a great idea, a unique perspective to share, and a compelling vision can get in the game,” wrote Lauren Culbertson, public policy manager at Twitter.

Google also has a blog post up, stating “the Net Neutrality rules that protect the open internet are in danger of being dismantled.” Unfortunately the Google message was not accompanied by a Google Doodle on the internet’s most visible homepage.

Video game streaming site Twitch has a banner announcement on its channel page, while also replacing its global emotes with a spinning wheel for 24 hours. Netflix, Spotify, and Airbnb have all placed banners at the top of their homepages, while Vimeo has an explainer video and graphics made available for download. Other websites, including Facebook and Amazon are participating. Oddly, Apple is not on the list of participants.

Arch villain, Ajit Pai, the FCC’s new chairman appointed by President Trump, wants to scrap the open internet protections installed in 2015 under the Obama administration. Those consumer protections mean providers such as AT&T, Charter, Comcast, and Verizon are prevented from blocking or slowing down access to the web.

Surprisingly, AT&T, which has not been a fan of Net Neutrality, decided to join the protest, writing on its public policy blog:

“This may seem like an anomaly to many people who might question why AT&T is joining with those who have differing viewpoints on how to ensure an open and free internet. “But that’s exactly the point — we all agree that an open internet is critical for ensuring freedom of expression and a free flow of ideas and commerce in the United States and around the world.” Recode reports that the company will air ads in DC this week as part of the effort.

Other cable companies have attempted to make similar arguments. Comcast, for one, has argued that it supports net neutrality, but that the FCC’s current rules are overly burdensome.

Evan Greer, a spokesperson for Fight for the Future, the nonprofit group organizing the day of action, said in a statement that AT&T’s participation was the latest step in a “campaign of misinformation.”

“I have to admit, this is so ridiculous I’m laughing out loud,” Greer said. “AT&T and other companies like Comcast and Verizon have waged an all out war on net neutrality protections, because they want to be able to charge Internet users and startups extra fees, and squeeze all of us for more money for less Internet.”

The bottom-line: Comcast, Verizon, and AT&T want Congress to make a Net Neutrality law because they will write it. Only in Trump’s America.

To learn more about the changes that loom large under a non-neutral Internet AND how you can make your voice heard, loud and clear, in the other Washington, see our ShopTalk article. [24×7]