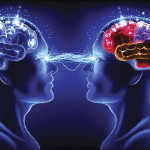 It reads like a headline torn from the pages of science fiction.

The first demonstration that a non-invasive brain-to-brain interface (BBI) can be used to allow one human to guess what is on the mind of another human has been documented in the scientific journal PLOS One based on research undertaken at the University of Washington.

Through an interactive question-and-answering paradigm similar to the “20 Questions” game, the results demonstrate that using the BBI, ten participants (five inquirer-respondent pairs) can successfully identify a “mystery item” using a true/false question-answering protocol similar to the “20 Questions” game, with high levels of accuracy that are significantly greater than a control condition in which participants were connected through a sham BBI.

Direct brain-to-brain interfaces (BBIs) are technologies that combine neuroimaging and neurostimulation methods to exchange information between brains directly in neural code. In BBIs, specific content is extracted from the neural signals of a “sender” brain, digitized, and re-encoded in the form of induced neural activity in a “receiver” brain. BBIs have been recently demonstrated in both animal models and humans.

In the experiment, ten healthy participants recruited through word-of-mouth advertisement from the student, staff, and faculty population at the University of Washington, took part in a controlled laboratory experiment.  Participants playing the role of the respondent were fitted with an EEG cap and seated in front of a monitor  with “Yes” and “No” text labels at the lower left and right corners, respectively.  The inquirer sat in a darkened room, and wore high-quality noise-cancelling earplugs.The respondent and the inquirer were located approximately 1 mile apart, in different buildings on the University of Washington campus: the respondent was located in the department of Computer Science and Engineering, while the inquirer was located in the Institute for Learning and Brain Sciences. Each experimental session lasted approximately 50 minutes, and consisted of 10 experimental games and 10 control games.

On average, the  five pairs of subjects were able to successfully guess the correct object in 72% of the games in the experimental condition using information available from the BBI, in contrast to only 18% successfully guessed during the control conditions.

Researchers Andrea Stocco, Rajesh Rao and colleagues at the University of Washington appear to have figured out a new way to set connection between brains of two persons through the Internet. The project is still in its initial stages of development and a typical conversation takes hours to transmit. Nevertheless, the research on these brain-to-brain interfaces is valuable because it might one day allow patients with brain damage who cannot speak to communicate using other means. [24×7]