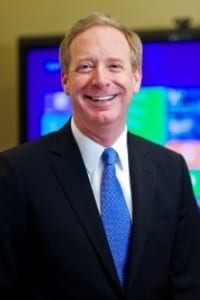 Microsoft CEO Satya Nadella has promoted Brad Smith, the corporation’s general counsel, to the position of president and chief legal officer. An official announcement from the company declared that Smith “will play a key role in representing the company externally and in leading the company’s work on a number of critical issues including privacy, security, accessibility, environmental sustainability and digital inclusion, among others.”

The Seattle Times has called Smith “Microsoft’s peacemaker.” Columbia Law School, where he acquired his JD degree, describes him as an “international diplomat, enforcer, defender, and business strategist.” In 2007, Fortune wrote that the popular depiction of Smith as “the face of the kinder, gentler, post-monopoly Microsoft. . . is not really apt,” describing him instead as “projecting intensity, determination, a hint of Ivy League hauteur, and ambition.” This criticism did not come, however, without Fortune’s first conceding that “Smith is a polished, thoughtful and credible advocate.”

A High Profile in Legal and Corporate Affairs

Smith joined Microsoft in 1993. Before “becoming general counsel in 2002 he spent three years leading the Legal and Corporate Affairs (LCA) team in Europe, then five years serving as the deputy general counsel responsible for LCA’s teams outside the United States,” stated Microsoft’s announcement. Smith’s work during those nearly two decades put Microsoft front and center in policy debates of considerable tension, such as privacy, data protection and security. As recently as last Tuesday, one of Smith’s most contentious cases was being argued before the Second Circuit Court of Appeals. The case involves Microsoft’s refusal to comply with a U.S. search warrant for Hotmail emails that were stored in Ireland. “In a nutshell,” Smith wrote in April when the case was filed, “this case is about how we best protect privacy, ensure that governments keep people safe, and respect national sovereignty while preserving the global nature of the internet.”

In addition to his work at Microsoft, Smith is active in several civic and legal organizations and in the broader technology industry. In March 2015, Smith joined the Netflix board of directors. He also works to advance several significant diversity and pro bono initiatives, serving as chair of the board of directors of Kids in Need of Defense (KIND) and as chair of the Leadership Council on Legal Diversity (LCLD). In addition, Smith chairs the board of the Washington State Opportunity Scholarship program, at the appointment of the governor.

Smith grew up in Appleton, Wisconsin, where Green Bay was the big city next door. He attended Princeton University, where he met his wife, Kathy (also a lawyer), and graduated summa cum laude with a concentration in international relations and economics. He earned his J.D. from the Columbia University School of Law and studied international law and economics at the Graduate Institute of International Studies in Geneva, Switzerland. Prior to joining Microsoft, he was an associate and then partner at the Washington, D.C.-based firm of Covington and Burling, where he is still remembered as the first attorney in the long history of the firm to insist (in 1986) on having a personal computer on his desk as a condition for accepting a job offer.