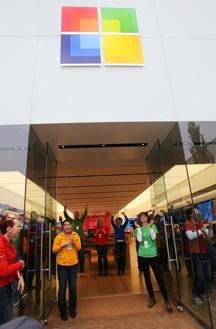 Like the classic “filling station” wars of the 1950’s when rival service stations pitched the price of gas from competing street corners like slings and arrows, the new Microsoft Retail Store at University Village has conjured up the notion of a local turf battle with the Apple store situated directly across the parking lot, within easy Xbox 360 shooting range.  Adding to the drama, the two brands were just named the world’s most valuable with Apple currently occupying the top spot and Microsoft placed at number three, according to  the European Brand Institute.

A new Microsoft storefront opened up with great fanfare at the open air shopping center last Thursday, including a ceremonial ribbon cutting, and a live performance  by the popular musical act, The Black Keys.  Seattle Mariners slugger Edgar Martinez and Seattle Sounders FC goalkeeper Kasey Keller put in special appearances at the store to play with Microsoft Kinect.  Take that iPads!

An estimated 1,000 onlookers braved the crisp autumn winds to stand in line and be among the first to check out the latest in boxed software, Xbox gaming accessories, and a lineup of laptops, tablets and computer gear.

Directly opposite, the mood at the Apple store was considerably more somber. Apple had closed all of  its retail stores on Wednesday in observance of  Steve Jobs passing.  However, the U Village Apple store had also been papered over in recent weeks for a rejuvenation of its own, the better to contrast with the glistening, new Microsoft facade. Jobs has been given credit for revolutionizing the merchandising of computer sales in full “Genius Bar” fashion.

The physical juxtaposition of the rival retail stores is reminiscent of an era now being rekindled, (or perhaps that term is suggestive of yet another store to come).  The deja vu’ flashback of this week’s Jobs’ biography has reopened the time-worn rift between the company’s styles and philosophies. In the Jobs’ life story by Walter Isaacson, Apple’s CEO  criticizes a lack of creative arts and letters in the Microsoft corporate culture and a mimicry of the Apple operating system.

But the era of OS leapfrog has croaked. With the introduction of Windows 8 and Windows Phone 7 the design metaphor for Microsoft’s computer interface represents a radical departure from anything resembling the Macintosh computer desktop and its Lionized version of OS X.  Not better or worse, just very different.

Instead, the clone wars have shifted, according to Apple, to Google and Android and smartphone partners like Samsung who have given new meaning to concepts like  “fair use” or “creative license.”  The Jobs’ book indicates that Apple is bent on fighting what it perceives as a blatant misappropriation of intellectual property.

Indeed, Google’s acquisition of Motorola Motility and Microsoft’s patent deals with Android device makers insinuate that they are the deal points of a much grander bargain that levels the field for all players. Since Microsoft launched its IP licensing program in December 2003, the company has entered into more than 700 licensing agreements.  While Android was an open-sourced Google brainchild, it is estimated that half of all Android devices today have entered into patent agreements with Microsoft.

Should Bill Gates have done as Steve  Jobs suggested and tried LSD or spent time on an Ashram when he was younger, he probably would not have run into many patent lawyers.  Nor would turning on and dropping out have lent a different look to either  The Microsoft Store or the Windows’ 8 user interface. But perhaps the fate of Zune would have been more melodious.  [24×7]