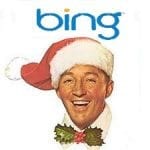 At this quixotic time of year, sparkling ornaments, tree lights and tinsel can transform a Northwest evergreen into an objet d’art. How ironic that Google Earth 5.0 touts its use of computer-generated trees to dot a pixelated landscape with 3D realism. But that very landscape is starting to shift.  Microsoft is dramatically fortifiying its Bing Search stock-in-trade with a dazzling array of stocking stuffers. Make no mistake. These are not holiday baubles and beads. This gift from the ghost of Christmas Future  has the panoramic power of Bing Vision to boost Microsoft’s share of  the dynamic search market and momentum.

It’s time to shift the camera angle. Consider the imminent move from exterior street view to interior store view. Who has more experience than Redmond and its PhotoSynth technology to stitch together images framed by a single camera, or hundreds of single camera frames in collaboration, to produce cohesive, panoramic imagery?   That is what Microsoft has just introduced in its “12 Days of Christmas” with Bing Panorama. It provides users with the world’s first immersive, 360-degree, wrap-ar0und photos of local businesses right inside of their search engine experience.

Haven’t seen it? To whet your appetite, Bing Local lets you “step inside” and explore full panoramas of restaurants through a partnership with EveryScape Eats.  Interior Views are accessed by clicking on the “step inside” panoramic thumbnail on a Bing Local details page. Clicking the thumbnail opens the experience (built on Silverlight) and enables you to jump inside the restaurant, move from room-to-room, and explore 360-degree views. The current coverage is around 5,000 restaurants (majority Boston metro area) but will be expand continually for breadth and depth in more cities.

The next focal point in Local search is not aimed at the streets on a map but trained on store showrooms and shelves. The very future of “telepresence” is at stake, and it belongs to the swift.  Microsoft is in an ideal position to capitalize on it, and for once, its timing could not be better! 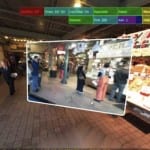 And there’s even more under Redmond’s spruced up tree to pine about. Also announced for local search is Real Time Transit on Mobile that gives users real time updates if a bus is on-time or delayed.  The new Bing for iPhone service adds up-to-the-minute data for Seattle, Boston, and San Francisco transit agencies. In one release cycle, Bing added transit routing and is now the first search engine to offer real-time transit information.

If you’re out and about, or just on a virtual stroll, Streetside on Bing Mobile gives you the street-level imagery currently available on the desktop but with a few eye-popping “enhancements.” If you pinch the screen to zoom out, the Streetside imagery will be stitched together so you can flick your finger and swiftly pan through streets. Also, the names of local businesses in the current street-level view appear under their respective buildings so you can learn more about what you’re seeing. You can also tilt the viewfinder and watch the street scene become extruded into a 3D cityscape.

Watch this demo by Bing’s principal architect, Blaze, in a CNET video to see how compelling and easy Microsoft’s Panorama Maker is to use and you will see the way we will experience the interiors of shops, hotels and restaurants in 2011.  Eye candy was never so sweet!

The market forecast for search is also a weather convergence zone. Experian Hitwise showed Bing accounted for 25.27 percent of U.S. Internet searches for the four week period ending November 27th, up two percent from October. A comScore study showed Bing gaining a fraction of  a percent during October, while Google and Yahoo showed slight declines.  As 2010 draws to a close with a total eclipse of the moon, Microsoft is starting to exert its planetary pull with Bing Vision, and the new year ahead  looks nothing short of  panoramic. [24×7]