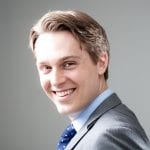 For Brayden Olson, the CEO and Co-inventor behind Recurrence Inc., the concept of gamification is about keeping it real.

Before the “G”-word became fashionable, the term that best described the kind of educational software he was designing was “enterprise simulation.”

No Pokémon here, unlike the arcade games he enjoyed playing as a kid on his Super NES device, nor one of the “bejeweled” casual games scoring big numbers for Seattle studios like PopCap Games or Big Fish Games, not the war and warcraft genre of Redmond’s Valve either, although each of these industry leaders is a neighbor.

Recurrence was founded to develop role-playing software that is infinitely more practical, more personal, and offers educators a more realistic simulation of the complex cases and modern scenarios students may actually confront in the real world.

Just as great teachers serve as catalysts for student success, the power of mentorship was an energizing force for this talented game designer and studio head. Brayden is quick to credit two educators, his two parents, for his early interest. Then there was Bill George, the CEO of Medtronics and a Harvard Business School professor, who wrote about Olson in BusinessWeek not long after their first encounter.

“It’s not only about great teachers and educators.

We’ve got to give them the tools they need for this century.”

Brayden’s closest mentor is his partner in enterprise. Dr. Bruce Avolio, the Executive Director of the Center for Leadership & Strategic Thinking at the Foster School of Business at UW, is his Co-Inventor and a Recurrence director. It was Dr. Avolio who approached the young entrepreneur with a pivotal question: How can the University of Washington make its business school offerings more like Microsoft Flight Simulator?’

After being recognized by Fortune Magazine as one of five “Startup Idols,” Olson was the youngest entrepreneur ever inducted into the Seattle Chapter of Entrepreneurs’ Organization, and was selected by the City of Bellevue as the Young Professional of the Year. Civically, he is also on the Board for his legislative district as well as the Chair of their Young Democratic Committee.

Seattle24x7:  Brayden, a staggering statistic flickered across the screen today. Not only are more people playing games online than any other type of social activity, but over 100 million viewers are watching others play games on the streaming network TWITCH! How do you explain that?

Brayden:  It sounds to me exactly like the National Football League — people tuning in to watch someone else play a  game. I think TWITCH is a sibling to that kind of spectating.

Seattle24x7:  So tell us, how do you define the concept of gamification?

Brayden:  When you think about gaming, you’re defining something about human nature that has been true for as long as we’ve been on the planet. We have always learned with games, tested with games, and challenged ourselves and others with games, even figured out our place in society based on how good we are with sports. Gaming is a part of our psyche.

In terms of gamification, I tend to put it in two categories of definition. First, there is “gamification lite,” which is where you’ve got some kind of game mechanics, whether it be badges or points or a leaderboard attached to something like a website or a lecture, or a set of documents. It still engages the human psyche and makes the situation more entertaining.

I would define the other kind of gamification as bringing full game elements into something that’s not traditionally a game environment. So you’re going to see avatars, or a series of visuals, or a simulated experience that is truly taking the environment somewhere it has not been before — be it the classroom, the hospital, or the public library.  The first example includes some basic features of gaming, whereas the second has true, immersive gaming aspects. 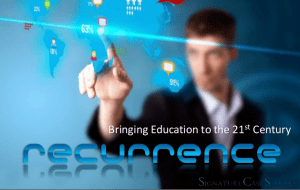 Seattle24x7:  What fed your initial passion for gaming?

Brayden: It’s funny, the industry is so young and yet sometimes I feel old. Nintendo NES would actually have been my first real exposure, playing Mario with my family. But the moment I decided I was going to do it for my career came when I was probably 11 or 12 and I was a beta tester for one of the 3-D virtual worlds. It was a game called Asheron’s Call which ended up getting published by a local company by the name of Microsoft. It was the first game I’d ever played where the sun rises and falls, the seasons change, the people you interact with are real and from all around the world. I thought, this is going to be such a powerful medium for my generation. What could we do with it that was more than just entertainment?

Seattle24x7:  Where did you find the nexus between gaming and education?

Brayden:  Both my parents are educators and so I was directly in touch with what was going on in the field. One of the conversations taking place was an evolutionary step in online learning regarding Massive Online Open Classrooms, or MOOCS.  The thinking was we’ve got these really great professors and lecturers from around the world.  Why are we only sharing them with 30 people at a time when we could get them to thousands or tens of thousands? The struggle has been how to monetize it appropriately to be cash-flow positive especially since many of those benefitting are in emerging markets. Games are a huge part of the solution in that calculus.

The connection that put us on our current path is that the folks at the Foster School of Business at University of Washington approached me. They asked the question: We’ve got a wealth of information in the form of classical business case studies. Why can’t we be doing something like Flight Simulator for business and put our students in the shoes of real executives at real companies who are working with real data?

Seattle24x7: Are you saying a client like UW just walked in the door?

Brayden: I have to credit the vision of Dr. Bruce Avolio.  He comes from an academic background and he is always thinking about what’s next. Bruce had become familiar with some of my early work in gamification and reached out.

My first mentor was a guy named Bill George who helped build Medtronics to be the world’s largest medical technology company. Bill wrote an article that was published in BusinessWeek where he very graciously tied-in my work with some other leaders who were far more impressive than I am. Huffington Post also did an article about the top 30 most underrated innovations of the year where they listed the work I was doing on their countdown, literally putting Gamification between iPad and Gmail. Fortune magazine called me when they were doing their fist article on emerging tech and the field of gamification.  We were also feature in Fast Company.

I was very grateful for the media attention. That’s how Dr. Avolio found us.

Seattle24x7: What kind of work were you doing at the time?

Brayden: At first, we were looking into the concept of how you could use gamification and behavioral assessment to help get people to the right schools or possibly pair them up with the right companies. You have seen the statistics. 75% of the jobs today’s students are going to fill did not exist when they were in school. We were working with HR leaders at Nike, Starbucks, and Alaska Airlines. 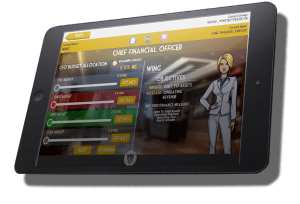 Seattle24x7: Your newest product is called Signature Case Study. What can you tell us about it?

Brayden:  Our first case study is the Foster Signature Case named in honor of our visionary collaborators at the University of Washington.  It centers on decision-making and critical thinking, the kind of skills that students need if they are going to become leaders in a world that is constantly in flux.

In the game, students enact high-level executive roles, such as CEO and CFO, as they guide an airline company through a series of challenges and crises: a labor strike, a plane crash, a fuel crisis, and a hostile takeover attempt.

This first case is for leadership and management professors. We have been overwhelmed by the positive response and are confirmed for deployment in over 30 schools including Stanford, Johns Hopkins, Penn State and many more.

By playing the game, students realize the consequences an airline must undergo to make serious reforms, such as changing its budget and business culture, or face dire consequences.

The game was derived from an in-depth, multi-year research study conducted with a major airline, and the challenges in the game are based on real-world data and reflect decisions that actual senior executives face. The principal goal is to teach students the consequences of their leadership and managerial choices, with the aim of providing insight on how to improve their leadership in the real world in a fun and engaging way.

Recurrence will be developing a series of these Signature Case Studies for many other academic areas including finance and accounting, political science, law and nursing. Our next case is already in the works and enough licenses for the product have already been pre-ordered to pay for its development.

Our vision is to eventually create a marketplace out of this that will let people create their own Signature Cases. 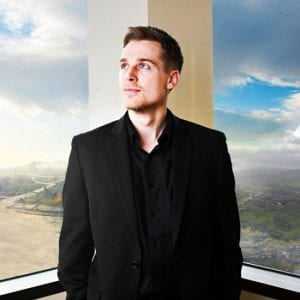 Seattle24x7: Last question, why do you think the Pacific Northwest has become such a potent hub for gaming?

Brayden:  I think we have definitely earned that distinction while we remain healthy competitors with the San Francisco Bay Area. We’ve won Console Gaming with Nintendo and Microsoft being here. The Bay Area has probably won in Social Gaming; Zynga and Facebook. We’ve won Casual Gaming; Big Fish Games, PopCap, et al. We don’t know who is going to win Gamification or who’s going to win VR.  I think we need to remain vigilant and invest in these technologies. This is an industry that leads to high paying, professional jobs that we really want to maintain in the region.

A big part of the “why?” is our culture. We fostered it. We cherish it. We have a genuine interest in the realms of fantasy and science fiction.  It’s a great industry. We are in a fight to keep it!  [24×7]