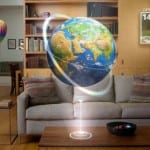 The new Edge browser or Cortana voice-enabled file launcher? Personalized ads appearing on the Windows 10 lock screen? How about Android and iOS apps now “portable” to Windows 10?   No, these are almost teasers for the coolness emerging around Microsoft’s multi-dimensional address at the 2015 Build conference.

By far, the coolest update at Build is how HoloLens will join Windows 10 apps in creating an immersive and reality-augmented three-dimensional computing space. Not years from now, but in the current Windows 10 release timeframe.

The HoloLens, first unveiled in January,  is Microsoft‘s immersive headset. What makes it the most promising for mainstream adoption is its focus on augmented reality instead of virtual reality.  Unlike VR headsets like Oculus Rift, the technology overlays a new dimension in data visualization on top of the real world.  Watching a cyber pet scurry across the floor of your office, playing virtual Minecraft on a coffee table, or teaching human anatomy with X-ray like vision or on an operating table are but a sliver of the near-term possibilities.

“Everything you’ve seen here today is a universal app,” said HoloLens designer Alex Kipman  “With holograms you’ll have a new canvas. Your apps can come to life!”

There are no wires, no external cameras, no phones, or no Internet connectivity required. Microsoft has partnered with NASA, Unity, Legendary, Autodesk, Walt Disney Company, and many more for a widening range of vertical industry applications.

For instance, Microsoft also showed off B-15, a robot built from a standard maker kit, powered by a Raspberry Pi 2. In this example, HoloLens placed a virtual robot on top of a real one. You can also use voice commands to make browsers follow you around.

“Professional and practical’ is the consensus. HoloLens should create plenty more footholds for useful applications that the commercial failure of Google Glass did not. At least not yet! [24×7]