Avvo, the originators of the Web’s first online consumer research, rating and referral service for Lawyers, has launched a new service area that applies the same, professional scoring, rating and interactive Q&A system it has used successfully  for lawyers, to an entirely new marketplace,  the nation’s 800,000 doctors.

What is the pain point in the market that Avvo and its Doctor search can cure?  “The problems that people face when they are looking for the right doctor are very similar to those they face in finding a lawyer,” explained Director of AVVO Marketing, Conrad Saam.  “And yet, most people spend  more time researching their family vacations or their family car than a family physician!”

Checking the pulse of the market, Avvo discovered  that 80% of consumers, or patients, spend less than two hours researching their health care providers.  So while doctors are collectively spending $550,000,000 a year advertising in the Yellow Pages, what we basically have now is a system where people make health decisions based on the biggest ad in the Yellow Pages. And that’s appalling!

Another problem is insurance.  If you need a doctor who will accept Blue Cross, or Aetna, or other coverage, the data that you find on sites today is sparse.  With Avvo for Doctors, that could change.

We got Conrad’s diagnosis a few days prior to launch in this exclusive Seattle24x7 interview.

Seattle24x7: Why has Avvo decided to feature both Doctors and Lawyers on the same site?

Conrad: Given the fact that we’re already working with 2 million visits to the site every month, the ability to cross-pollinate within the brand experience is significant. The two profiles are actually fairly similar.  For example, the “Q&A” functionality in both areas is  similar.  Both Legal guides and Health guides are similar.

Seattle24x7: Will people be more willing to rate their doctor than their lawyer? For example, giving an endorsement to a DUI attorney or a divorce lawyer may be awkward, but who wouldn’t want to support their family doctor or GP? Will you see a much higher volume of patient input?

Conrad: It’s interesting, the average person will interact with three lawyers in their lifetime whereas the average person has three doctors in their lifetime at any given moment in time.  So you’re dealing with what is potentially much greater volume. And there’s  a second level to that as well. People love their doctors. You have doctors who are saving lives. So the interest or opportunity to commend a doctor may may be great. At the same time, patient privacy is very important and  so the user interface and terms of use are clear about not disclosing readily identifiable personal information.

Seattle24x7: Are you able to filter incoming patient reviews for content and relevancy?

Conrad: One of the things that makes Avvo different is that we manually review all statements before they go up.  They are looked at both algorithmically by computer and also by at least one team member who will personally read the review before it’s posted.  The overall quality of the reviews has become so important to us that we want to make sure that we have a gold standard when it comes to a reviews that is on the site. 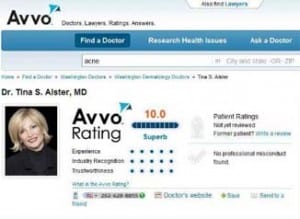 Seattle24x7: Are Doctors able to respond to reviews that are negative?
Conrad: There are a couple things that the professional can do in that context. The first is, and we encourage this, is that the professional can actually respond to the review within the profile. That is what we consider to be a best practice, although some lawyers are reticent to do that. We also have a process whereby we will actually do the auditing and research or reconsideration to preserve the anonymity of that reviewer. In cases where there is a question, we may actually challenge a review, to confirm that the reviewer will stand by it or it should be removed.  It’s a very time-intensive and expensive approach but the quality of reviews is really important to the consumer and to us.

Seattle24x7: How would you compare the Medical data sources you are working with to those on the Legal side?

Seattle24x7: Will all doctor records be available at launch?

Conrad: We are rolling out with only a percentage of the MD’s and  Osteopaths that will continue to be added to the system, and of course, without the user-generated content.  Another logistical challenge is that the disciplinary information for doctors is housed within the states. At launch, we’ll be covering roughly 50% of the doctors whether or not there is disciplinary history and the profiles will be noted as incomplete until added. [24×7]