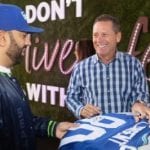 When Steve Largent was given the nickname Yoda for being able to catch anything thrown at him on the football field—and before #80 would proudly float above CenturyLink Field next to the 12th Man banner — the all-time leading Seattle Seahawks receiver was earning major NFL records for unparalleled receptions, including: most receptions in a career (819), most receiving yards in a career (13,089), and most touchdown receptions (100).

On this day, at 165 South Jackson Street in Seattle’s Pioneer Square, the legendary receiver signed “HOF ‘95” (for Hall of Fame ’95) next to his autograph on a bevy of silky, souvenir banners that were handed out for free to the many fans who gathered at the American Express Experience just prior to the home opener of a Seahawks NFL season.

Later that afternoon, taking the field for a legends-of-the-game halftime appearance, Largent could reflect back on a career not only as a peerless wide receiver but as a leader in the wireless world.

Steve accepted the challenges of president and CEO of the CTIA -The Wireless Association, after four years as a U.S. congressman. Like the Seahawks, Largent endowed the wireless trade group with a legacy of achievement that has propelled the organization to the precipice of today’s emerging 5G telecommunications standard. 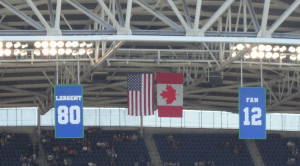 Largent assumed the top job at CTIA in 2003 and played a key role in the industry’s unprecedented expansion. The number of U.S. wireless subscriptions more than doubled during his tenure to over 618 million, leading wireless data traffic to unparalleled growth of 674 percent.

His political skills fostered a public policy climate that helped ensure a high degree of certainty for the industry to collectively invest more than $220 billion in wireless infrastructure. Under Largent’s stewardship, the Federal Communications Commission conducted a series of successful spectrum auctions paving the way to next-generation 5G.

Passing the torch is not unfamiliar to the Yoda master. Seahawks fans may be less aware that Seahawk’s receiving star Doug Baldwin credits two years of text message exchanges with Largent for both information and inspiration — tips like “focus on the tip of the ball,” not the ball as a whole.
“Doug texted me and asked me some things that I carried through training camp and things that I would work on and stuff like that,” Largent said. “I talked about the release off the ball and what I thought about catching the ball and a few ideas like that.” 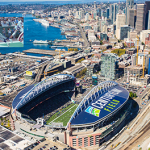 Speaking of tips for greater “over the air “ reception, America’s wireless providers have created a “Consumer Code for Wireless Service” that is comprised of a checklist of 13 principles and practices for wireless service providers, such as offering free notifications when you’re approaching data limits that might carry additional charges. The CTIA has also published a helpful page of guidelines for How to Choose a Wireless Device.
The American Express Experience is a fan zone featuring several unique photo opportunities just steps away from Seahawk’s home field, including a Giant Hawks Throne made up of Seahawks helmets and footballs, a ‘Wings Of Their Own’ mural inspired by local Seattle artist Angelina Villalobos, additional photo moments and pre-game activities. 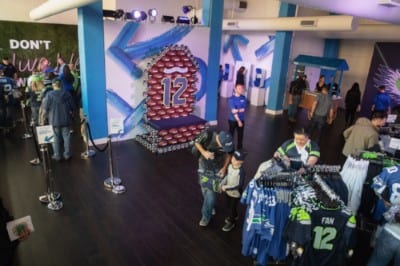 American Express is reuniting with the Seattle Seahawks (its sole NFL sponsorship) in a partnership for the 2018 season. The two are also bringing back the All For The 12s platform that provides a variety of benefits for Card Members and the 12s all season long. Benefits are to include the new American Express Experience pre-game activation, in-stadium offers, and more.
Check out the American Express Experience Seahawk fan venue at 165 South Jackson Street in downtown Seattle.  [24×7]