Since the dawn of the digital age, the most potent ideas have been described as being the most “disruptive” for their transformative power to realign the status quo. By the sheer size of its revenues and its user base, the media properties it dominates, and the industries it has displaced or recast, the Google AdWords pay-per-click advertising program may be the most disruptive change of them all.

It’s also the most difficult to master or, surprisingly, predict, since AdWords auctions for advertising position now occur in real time. Geography, day part, account history and “Relevancy” are all variables that contribute to a composite Quality Score that determines the eligibility of and the final placement of a Google AdWords ad whenever it appears.

Craig Danuloff has earned a yeoman’s reputation as a champion for promoting and challenging disruptive technologies. During the formative years he called Seattle his nesting ground, he helped hatch such disruptive technologies as commercial “desktop publishing” for Aldus Corporation (where he was recruited as perhaps the first real-world field tester of Pagemaker.) He continued as the iconocastic founder of iCat (short for Interactive Catalogue Corp.), Seattle’s very first bid on defining the e-commerce product catalogue.

Danuloff’s Web 2.0 company,ClickEquations, now oversees search management accounts for companies in both the Fortune 100 and the Internet Retailer 100. He participated in the recent SMX Advanced search marketing conference at Bell Harbor.

Craig’s new book, Quality Score in High Resolution, proffers “Details, Secrets and Insights on the Metric that Can Make or Break Your PPC Results.” Has there ever been MORE required reading for performance-based search marketers?

Danuloff was afforded rare insight into the algorithmic underpinnings of Google’s AdWords’ system by vetting his analyses with Google Adwords Product Manager Frederick Vallaeys. In exchange, Google was able to review and comment on a near-final draft of the book. The “High Resolution” picture here is about as close to an x-ray of Google AdWords’ inner-workings as one will ever get.

The most striking aspects of the book, therefore, would be the many myths about Google AdWords that have pemeated the Internet sales and marketing culture. Knowledge is power, and in AdWords that knowledge is manifest in cost-per-click.  What you don’t know, or what you think you do know about Google AdWords (but don’t) could be costing your AdWords account a great many thousands of dollars.

For example, there’s the “Relevancy” myth. For years, search marketers have assumed the standard definition of relevancy, namely being linguistically pertinent to a keyword or ad copy, as the operative one in Adwords.  For example, by tieing the keyword semantically together with the headline and the body of the AdWords ad, and in correlation with the content of the landing page, a kind of symmetry of keyword theme would be achieved.

But that harmonic chord is actually a sour note.

“The problem is that Google isn’t using the dictionary definition of “relevance,” writes Danuloff, “when they refer to it in terms of quality score. They aren’t checking to see if words or concepts are identical or similar or related. Instead, Google uses an indirect measure of relevance in terms of user behavior.”

Relevance is whether the search term has performed with searchers based on previous clicks.  If users clicked on the ad, it is relevant. If not, it is irrelevant. Relevance = CTR!

AdWords performs no semantic or linguistic analysis comparing your keywords to your ad copy or the text on your landing pages. Including keywords on your ad copy does not inherently improve relevance of quality score, and including keyword s on landing pages does not inherently improve landing page quality score. The only thing that improves relevance are things that get more clicks. It’s the results, or the ends, that are relevant, not the means!

This is a startling revelation in at least one respect.  What Google is telling you when it brands your Quality Score as something less than “7,” which is the average or optimal QS value, is that the ad is underperforming for one of several factors: targeted geo-market, time of day, max bid or budget. These are all  the most “relevant” factors to your AdWords success, and none are contextually related to the subject matter!

* The Myth of the Public Quality Score.

The visible Quality Score as reported in AdWords as a number between 1 and 10 is not the actual Quality Score.  It does not reflect many of the factors considered in other quality score versions and it has no effect beyond providing impact to advertisers and paid search managers.

* The Myth of Landing Page Quality as a Part of the Real Time Quality Score.

When determining the order in which ads will appear, AdWords uses quality score for ad rank, but it is calculated without considering landing pages. This means that you can earn the #1 spot (or any other good position) even if you have a very bad landing page. Source: http://goo.gl/l98iK

* Landing Pages are Not Reviewed in Real Time, or Even Quickly or Frequently.

Landing pages are generally reviewed within a few days of when first used as target URLs within AdWords. But after that, if the page changes and the target URLs don’t it can be days, weeks or even months before the page is reevaluated. 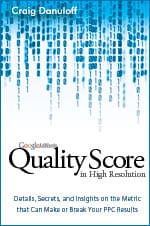 Quality Score in High Resolution is chock full of these insights making it practically an act of neglect for any search marketer who is conducting an AdWords campaign NOT to pick up a copy.

To order it for yourself, visit clck.it/qsbook. To learn more, click over to clck.it/qualitybook

And start infusing your AdWords campaigns with some disruptively successful, high resolution results!