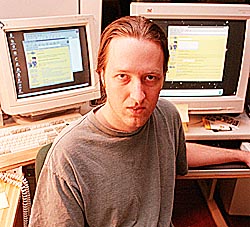 He doesn’t carry a badge, tear gas or pepper spray. The closest he’ll ever get to his nemesis — who could be hiding anywhere in the world (and is always in disguise) — is a computer in Lake City, just outside of Seattle. But thanks to the filtering software he developed known as Spam Cop, and a service used by more than one hundred thousand people, Julian Haight is out to bust E-mail spammers when they strike, often within just a few minutes of the first time an obnoxious letter arrives in your E-mailbox soliciting you for a “get rich quick” scheme, a baldness cure, or a sex site.

Haight, a 27-year-old computer consultant and the creator of Spamcop.net helps track spam — unsolicited junk E-mail sent out in bulk — back to its source and then automatically send a complaint about it to the proper authorities.

We got in touch with Julian to congratulate him on his detective work and find out what it’s like to be one of the toughest Spam Cop’s on the beat.

Seattle24x7: What annoys you the most about Spam-mail?
Julian: It’s really about wasting my time and intruding on my privacy. Not so much about the money, although that’s certainly a persuasive argument for someone who lives in Zimbabwe, or even in the UK where they pay by the minute for a phone call.

Seattle24x7: Your software is effective in reporting Spam as it happens and closing spammers down, hopefully putting them out of business. What kind of backlash has that caused for Spam Cop? Have you been threatened?
Julian: Oh sure, threats in the legal and physical variety. I don’t give anyone my physical home address. These are generally the big operators who try and fly under the radar, the illegitimate spamming companies who don’t have a fixed Website, don’t really have a presence online presence other than maybe an 800#. Some of them are some pretty large operators, so they really don’t like the instant reporting that Spam Cop provides — it really hurts them more than it would someone who sits still.

Seattle24x7: By instant, you mean that you get back to their ISP right away?
Julian: Yea, and if their ISP is on the ball, they’ll terminate the account within minutes of them starting to Spam. That’s one of the great benefits of Spam Cop that really no one else has had to this point. With the huge population of people that use it, chances are that someone is going to report spam within a few minutes of receiving it.

Seattle24x7: Are ISP’s on the ball?
Julian: Some are, some aren’t.. I think SpamCop has had an effect on the ISPs who aren’t. I publish statistics which are generated hourly and show the past week of Spam activity indicating which ISPs send the most Spam. Once in a while I’ll look at the statistics and make some phone calls and say, “Hey guys, what’s going on here?” AOL is a good example. For a long time, they didn’t do a whole lot to stop Spam, but many have have significantly cleaned up their act since.

Seattle24x7: Can Spam be legislated out of existence?
Julian:: I’m rather skeptical of the legislation angle. The attempted Spam bill by Congress started out as a great bill when it was introduced. But by the time it was up for a vote, it was almost a tacit endorsement of spamming. Spam is also an international problem so that U.S. law really doesn’t apply.

Seattle24x7: Should opt-in or double opt-in be made a standard?
Julian: Definitely. And opt-in should mean that the person who owns the E-mail address has actually requested the mailings, and double-op-tin or confirmation or whatever you want to call it is only a means to that end. If you don’t do confirmation than you are going to wind up spamming, even if you’re “opt-in:”

Seattle24x7: Any thoughts of growing the company?
Julian:Definitely. Some of the ISPs (AT&T among them) are using products already – one of them is BrightMail. The thing that differentiates the filters that I have from everything else out there is that they all attempt to do no harm, and Spam cop is very draconian.