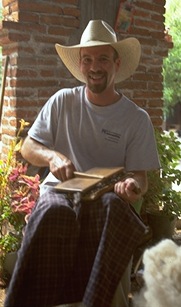 A virtual patron saint of career opportunity who manages one of the most popular Internet mailing lists of select job openings throughout the Puget Sound, Curt Rosengren believes that what comes around, goes around. He hasn’t forgotten the good advice and good fortune he benefited from when breaking into Seattle’s ultra-competitive field of high-tech marketing, getting the breaks every candidate needs to land that first position or assignment.

In return, Curt has been willing to share that good karma with others who are also in search of their first or next career post. His good fellowship may be a trait that he inherited from his father, a Lutheran minister, who showed Curt the world while he was growing up, moving between various states in the northern US and Cambridge, England.

In Queen Anne, where Rosengren maintains a home-based consulting office, you’ll often find this virtuoso marketer/job guru in his other “office,” having coffee with friends and clients at El Diablo, a local restaurant. We sat down to ask him for his weather report on the current stormy conditions in the Internet job market and for his forecast.

Seattle24x7: You’ve been the keeper of the Marketing Dreamjobs mailing list, focused on top marketing-oriented opportunities in Seattle area high tech companies. When did that start-up?
CR: I started the list in the spring of 1997 as an easy, “good-karma” way to help out. The initial list went out to around 65 people. Now there are close to 1500 subscribers.

Seattle24x7: Do you have an idea of how many people you have helped find jobs?
CR: Nothing specific but last year I’d generally hear about one or two hires a month on average.

Seattle24x7: What’s your take on where the job market is right now, have we hit bottom?
CR: I don’t get the sense that things are on an upward swing yet, from being out there, both with the job list and as a marketing consultant who is drumming up business. We may have hit a plateau at or near the bottom, but I don’t think we’re on an upswing as of yet.

My guess is that things will remain fairly soft through the end of the year. But I tend to look at things from the perspective that I’d rather be pleasantly surprised than be disappointed.

Seattle24x7: Are there still opportunities at the top of the pyramid, say in management positions, or has that echelon been hit just as hard as the mainstream Internet workforce?
CR: Proportionally speaking, things have been pretty well impacted through all levels. I don’t have the sense that senior levels are having an easier go of it. In fact, one thing that’s been surprising for me over the last few weeks is how many of the Marketing VP’s I’ve contacted from my list are suddenly in the job search. I don’t know if that’s a function of the fact that they’re on my list because they saw the writing on the wall, or simply a lot of people have gotten the axe out there. Or perhaps a little of both.

Seattle24x7: What is your advice for people entering the job market? Would you dissuade anyone form entering the Internet market?
CR: I don’t think that the current status of the Internet companies as pariahs is going to last. As crappy as it to is to be in the middle of it, and as unfortunate as it is that really good people and good companies got hit, I think that a lot of it has been a correction of some insane stuff happening out there. I think the industry itself is going to come out of this a lot stronger simply because there’s more due diligence happening now before decisions are made.

Seattle24x7: Your mailings contain Public Service Announcements for worthy causes?
CR: Yes. I recognized that the list goes out to a really juicy demographic, and I wanted to take advantage of that to spread the word about some cool non-profit organizations out there doing some great things.

Seattle24x7: What kind of marketing services do you provide as a consultant?
CR: One particular market research service I provide is called “Reality Check.” It involves conducting one-on-one interviews with a select number of a company’s key customers or other constituents and providing an in-depth report of findings. This affords a company unique insight into how others are receiving their marketing message. I also do general marketing collateral development and corporate identity work.

Seattle24x7: One last thing. What in the heck are you doing in that hat? (in the picture, above right)
CR: Carding wool…or at least pretending to. In my travels, I have become friends with a family of Zapotec weavers in Oaxaca, Mexico. In fact, I created a web site to tell their story and sell their weavings <http://www.rosengren.net/artisansinfocus/>. I tend to have my fingers in many pies (consultant, job guru, rug merchant…), and this is one of them.