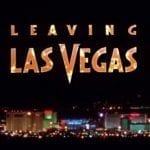 After a 14 year tenure as the opening act in the tech world’s largest new product extravaganza, it seemed only fitting that American Idol host, Ryan Seacrest, would be on hand to send Microsoft CEO Steve Ballmer’s back home after in his final star turn as a CES keynoter.

While the Redmond brigade says its marketing plans doesn’t synch well with the January timeframe for CES new product debuts, one has to wonder why Ballmer is already singing a CES swan song? One year off is practically an eon in Web time. How about 5, 10 or 20 years?  So long as Microsoft has a competitive consumer product to pitch in the marketplace or vie for its share of shelf space or  living room couch space,  it seems a bit presumptuous to bid farewell to legions of buyers and distributors in the consumer value chain.

No such pronouncements were made by any of the other sixty-two Washington companies that participated in CES this year, including Amazon.com and Airbiquity to start the list cascading in alphabetical  order.

Indeed, one Seattle company has been exporting the look-and-feel of “Vegas” to the rest of the world. No small amount of irony that Seattle’s Double Down Interactive, itself a Vegas-style “virtual casino,” hit a Royal Flush by being acquired for a cool half-billion dollars by gaming equipment powerhouse IGT. 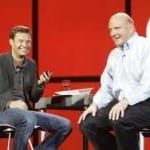 It’s true that CES is all about timing. Windows 8 and its tablet potential is the buzz of the industry, but with the product only entering beta in late February, OEMs’ focus on near-term deliverables for CES meant that the hottest Windows-based devices were ultrathin, ultralight laptops, better known as ultrabooks.

Microsoft’s Tami Reller, who participated in the Ballmer keynote, said, “We also have a lot of very cool things going on today, and nowhere is this more illustrated than through the range of stunning PCs that are available right now.” Reller, CFO and chief marketing officer of the Windows and Windows Live Division, specifically called out three PCs: the Samsung Series 9, the Hewlett-Packard Co. Envy 14 Spectre and the Dell XPS 13.

Where will technology be trending after fashioning the world’s thinnest tablets and notebooks? Why into thin air and no physical hardware at all, of course. Consider the tiny Celluon Magic Cube that projects a virtual keyboard onto any surface and watches your keystrokes (the device can also function as a multitouch “air” mouse” on the Windows platform).
Microsoft’s Surface computer also made a cameo appearance in the booth of Hong Kong’s TimeLink. A Core i5 and  coffee table computer running Windows 7 and Surface apps will price at $6,000 – considerably lower than the $8,900 Surface edition being offered by Microsoft and Samsung. 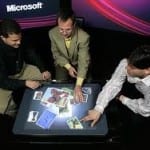 Speaking of sensors, the Kinect is already seeing some formidable competition including a 3D “Gesture Cam” from LG Electronics and a host of other Kinect-like wannabes. Kinect for Windows is a bridge that spans a broad range of new markets. Microsoft sees Kinect as a hospital and health care staple, as a natural for the retail industry and as an interactive  teaching tool.

Coming February 1st, Microsoft’s Kinect for Windows platform is being built in a way that will allow other companies to integrate Kinect into their offerings.  With the broad base of applications Kinect could encompass, our Vegas bet is that Microsoft  won’t be gone for very long.

In the meantime, how badly will the mighty “M” be missed at CES? The trade show floor space Microsoft gave up was sold out in under an hour.  [24×7]