Seen the Coen Brothers movie Barton Fink?  This week’s  sequel could be called “Barton Frink. ” The stock market sale of 2.5 million shares at 482 each made co-founders Rich Barton and Lloyd Frink, in addition to CEO Spencer Rascoff, zillownaires, with Barton and Frink each stuffing $30.7 million under their mattress.

Zillow will use the money in part to acquire StreeEasy, a residential real-estate site with about 1.2 million monthly unique users, for $50 million in cash. CEO Rascoff  believes it can help the StreetEasy sales team to bolster advertising and subscription revenue faster than StreetEasy could as an independent company.

“You can’t lay claim to being the No. 1 real-estate site nationwide without being No. 1 in New York,” Rascoff said in an interview. “We’ve coveted StreetEasy for several years.”

Zillow, which bought San Francisco-based HotPads in December for $16 million in cash, said it may use proceeds from the share offering to make other deals that complement its business. It’s the company’s second stock sale since the initial public offering in 2011, and Citigroup has led all three.

According to Bloomberg News, closely-held StreetEasy has 34 employees and provides for-sale and for-rent listings through partnerships with the largest brokerages in New York.  Zillow’s 20 employees in New York will move into StreetEasy’s office, Rascoff said. 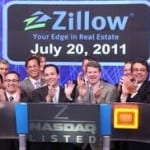 Rascoff is betting on a rebound of the U.S. real-estate market and said his product is a “friend” to brokers who use Zillow to connect with clients.

“The real-estate market is very hot,” Rascoff said on Bloomberg’s “Surveillance” program. “The market is back and the parts of the country that have bounced back the most were the ones that were in the doldrums.”  [24×7]

Zillow reported 61 million unique visitors at the end of July. The acquisition will allow Zillow to expand into the rentals market, and the company will probably use the stock offering to help pay for it, said Cakmak. His company doesn’t have a rating system.