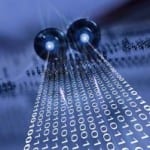 The recent SuperComputing 2011 (SC11) conference in Seattle was the scene of a new world record for an Internet transfer of gigabyte proportions. A FIOS shattering 98 gigabits per second (Gbps) was achieved between the University of Victoria Computing Centre located in Victoria, British Columbia, and the Washington State Convention Center in Seattle. Coupled with a simultaneous data rate of 88 Gbps in the opposite direction the two-way data rate of 186 Gbps broke the previous peak-rate record of 119 Gbps set in 2009.

To put that into some perspective, 186 GBps would roughly mean 100,000 transferred Blue Ray disks in a single day, or you could use it to download the current version of the Internet in 1,3 years. This extraordinary advancement will pave the way for the next generation of high-tech optical fiber networks, capable of transfering high volumes of information across oceans and continents.

The work is made possible by the strong support of the US Department of Energy Office of Science and the National Science Foundation. [24×7]

Zynga’s IPO, the biggest tech IPO since Google went public in 2004, raised $1 billion through the sale of 100 million shares on Friday and the celebration reverberated back to the company’s large presence in Pioneer Square, 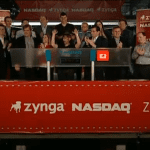 The company has 227 million players for its social games like “FarmVille,” “CityVille” and “Mafia Wars” and the popular mobile game “Words with Friends,” an Alec Baldwin favorite.

Rather than bringing Zynga employees to Wall Street, Zynga created a mock stock market that brought  Nasdaq came to them.  The Zynga version of “IPOVille” included  a ceremonial opening bell at Zynga headquarters in San Francisco.

“We’re a work hard, play hard kind of company,” CEO Mark Pincus said. “We don’t always take enough time to celebrate these moments. I’m most guilty of that. I hope you get more than a moment … to really step back and just enjoy and celebrate this moment in time.”

Zynga, which has pioneered a new class of social games, is the first to become a multibillion-dollar company by piggybacking on Facebook’s platform. Early on, the Zynga co-founder and CEO saw the potential for Facebook-connected games that were free, allowed friends to engage each other and could be played on any device with an Internet connection. He created applications powered by Facebook’s network and today oversees a company estimated to be worth $7 billion.