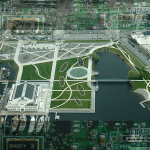 Amazon may have its Spheres with over 40,000 plant species sprouting like vines, but in the concrete jungle of office space surrounding the Seattle24x7-coined “Silicon Lake,” aka Lake Union, the high tech real estate habitat is being divided along different vines, or lines.
Vulcan Real Estate, the company owned by Paul Allen, has announced it is now developing a new 12-story office building for Google on a third block adjoining the more than 607,000 square feet Google has currently under construction. Work will begin on the expanded footprint for Google, which is slated to feature 23,000 square feet of retail space, in the fourth quarter of 2019, with an estimated occupancy date of 2021.

Like the Japanese Keiretsu concept where competitors occupy diametrically positioned headquarters, the burgeoning Google site occupies space directly across from one of Amazon’s original office buildings. The new real estate will bring the future Google campus size to a total of nearly 930,000 square feet.

While Amazon has been focused outwardly on a new location for its second corporate headquarters, dubbed HQ2, Google has been gobbling up nearly every square foot of available real estate in Fremont with PacMan-like efficiency, eating up space from tech companies like Tableau. At the same time, the GooglePlex in Kirkland, Wa. is reportedly also expanding.

As of March, Google employed 3,000 people in the Seattle area up from 1,900 two years ago. The new employment goal for downtown Seattle has not been tallied.

However, last year, a Google executive said the company’s cloud division will anchor the South Lake Union campus. Evidently, the cloud over Silicon Lake has a silicon lining. [24×7]