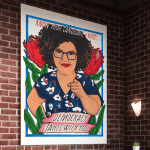 In 1917 J. M. Flagg designed the iconic Uncle Sam poster used to recruit soldiers for both World War I and World War II. It ardently told Americans, “I want you for U.S. Army.” Today, Seattle City Club, in partnership with Amplifier Design and the Washington State Debate Coalition are “recruiting” Washingtonians to participate in the most fundamental element of our democracy—voting.

Instead of meeting them with an authoritative personification of our government, we are meeting them with a friendly face of a fellow Washingtonian. Download, print, and share your favorite poster with the hashtag #waelex and inform others about the WA State Debate Coalition and inspire them to participate 2018 Election.

Raychelle Duazo is a queer femme Filipina-American visual artist from the Pacific Northwest. Her work focuses on themes of love, heartbreak, loss, memory, identity, and place. Raychelle has been commissioned by numerous groups for original work, including REI, MomsRising, and The California Endowment. More of her work can be viewed at raychelledraws.com

Raychelle has spoken on QPOC, art, activism, comics, and AAPI panels in NYC, San Francisco, and Seattle; and is an alumni of the VONA Voices Graphic Novel Program (2014).