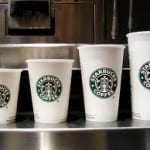 How does Starbucks, the largest coffeehouse company in the world, conduct social media marketing that supports 20,366 stores in 61 countries?

How can any one company manage the role of leader in the social and digital marketing world while relating to millions of followers? What is the Seattle coffee mermaid’s enchanted secret for overcoming such Web trends as advertising blindness and consumer hesitation towards advertising in general?

The DNA of Starbucks’ personality spirals back to an almost ”metaphysical” philosophy of  “inspiring and nurturing the human spirit.” The corporate mantra is “one neighborhood, one person and one cup at a time.”

At the Seattle Interactive Conference, Seattle24x7 heard from Dan Beranek, Director of Global Digital Marketing at Starbucks and Ryan Turner, Director of Global Social Media and Digital Creative, as they explained the unique alchemy behind Starbuck’s’ success and the best practices of “Network Branding.”

Let us fill your cup with an extra hot, double-shot of the marketing wisdom the coffeehouse giant has gained and how the luscious content “crema” has risen to the top.

Going Beyond the “Big Idea” 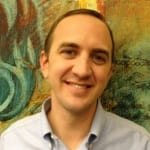 Dan Beranek: Starbucks is unique because it’s everywhere. It’s global. We are able to connect with people in grocery stores, at lunch, after work. We’re a part of the routine. What’s really interesting is the kind of direct emotional connections that can create. The connection can be a relationship between a barista and customer or something that is achieved through social devices. In each case, there is a direct emotional engagement that is built on the concept  of a “networked brand” that has an ongoing presence in people’s lives. Network branding means we elevate everyday moments each and  every day.

Ryan Turner: We have a great number of loyal fans: 53M on Facebook, 3M on Twitter, 20K on Pinterest, 873K on Instagram, and 611K on Google+.  The day-to-day way that our community managers relate to these people matters a lot. The goal is how to scale ou interaction. We try to make personal connections through social media and still communicate with people on a scale that is highly visible.

We do this in three ways: Campaigns, Content, and Conversation. 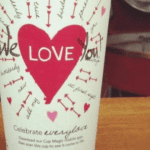 Ryan Turner:  One example of a campaign that makes a personal connection could be our approach to Valentine’s Day as a way to celebrate every kind of love.  For instance, Starbucks’ customer Dan Dewey buys coffee every Thursday for cancer patients, and we built a campaign to tell that story. Another extension is packaging — our “Red cups” are a sign for the holiday season.

Dan Beranek:  We wanted to find a way to extend that holiday feeling so we created an App to explore the Red cup idea.

When it’s about products, we often find passion. People really get excited about the Pumpkin Spice Latte. So we built a game for towns across the country to vote and try to get the latte in their town first. That sort of community connection can work really well. [Leavenworth, WA won this year. – Ed.]

A terrific multi-social media example is SRCH, a “Scavenger Hunt” with seven different rounds. This contest created a high level of engagement in a fun, unexpected, and digital experience. Mysterious QR codes started the ball rolling. The “hunt” then went from the QR codes to Tweet stream to Facebook page to TwitPics…bouncing users and engaging them in each channel (and turning Fans to SuperFans in the process!).

The final round caused people to plan their days around new rounds released, forming social teams, with 20 mins of interaction per user!

Ryan Turner:  These touch points allow us to continuously relate to our fans. Some people are truly engaged through contests like this. The attraction is essentially the experience of having fun while being a part of something at a community level.

Dan Beranek:. So there are four critical roles that come into play. Each of these has a team of strategists, analysts, administrators  and creatives behind it.

Ryan Turner:  Getting to the creative aspect — our social content is made by hand. We use felt tipped markers more than we use Photoshop. We want to present the product in a different manner than it may be traditionally viewed. We also try to tell stories visually. Or create motivational statements like “Do more of what makes you happy” or, for the Fourth of July, adding the word “Indivisible” on the red cups.

Pinterest is another tool that is actually very useful to us, being more image-oriented. There’s a new kind of conversation we can have with customers. We are appealing to a wide range of concerns, passions, and questions throughout these pinboards.

Dan Beranek:  Sometimes the lessons learned can be unintentional. On one occasion there was an accidental, simple tweet: that was posted.  Just a “Smiley”  :)  Well, the “Smiley” generated 1508 retweets. An inspirational moment. 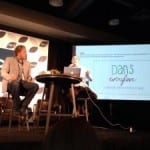 Dan Beranek: Starbucks has moved to a place in the digital marketing world where we can go beyond speaking to everyone the same way, and start to get more personal and connected with people.

That goes for any kind of comment, including complaints. For example, when responding to complaints , we try to appeal to people personally. One user tweeted a complaint and we noticed she liked haikus. So that’s how we responded to her – with a  haiku. It was a risk but it went over well.

One of the most successful social media campaigns recruited personal suggestions. MyStarbucksIdea  stimulated half-a-million customers to push their business ideas. Starbucks’ social teams were able to respond & interact with  participants – conversing about why we can or can’t do something. Personal connections are what makes the difference.

Ryan Turner: We want to be the place where people can come together and talk about their beliefs with an open mind.  So we gave out free coffee on Election Day to encourage people to vote, no matter who they were voting for.

Without question, at Starbucks there is as much passion for a program like Create Jobs for USA, then there is for a Frappuccino or Pumpkin Spice Latte campaign. We want to promote both of those things because that’s the role of our brand in society. [24×7]