Could WHERE you play your favorite mobile game in the future, and the way  it  responds to your surroundings, create a more engaging and enjoyable experience than HOW you play?  One Seattle company is finding it pays to know the score. Where real world and virtual world connect, friendly, local competition can lead to higher engagement and higher click-through rates for in-game advertising.

Just ask the developers at PressOK Entertainment, makers of PlacePlay, a new mobile gaming platform that makes location relevant to mobile gamers, enabling developers to serve relevant, high-eCPM ads to their users. Data collected during PlacePlay’s three-month private beta revealed that PlacePlay Tournaments, which can be integrated in as little as one day, create 1.6 times more active participation than gamers outside the system, with eCPMs between $10 and $20, a high watermark in the gaming world.

Apple does not currently allow the use of location in applications for the sole purpose of serving location-based ads. However, location-based ads are acceptable if the application provides the user with location-specific features and benefits, and this is where PlacePlay fills a void, providing both developers and brands with additional revenue and awareness opportunities.

“Developers now have an easy way to increase player engagement,” Ryan says, “and if they want, they can use our integrated local advertising platform to increase their revenue at the same time. That’s pretty cool.”

We got Ryan to put on his game face and, like Tron racers, take us inside the world of the local tournament gridiron.

Seattle24x7: PlacePlay is all about real-time, local competition.  So what kind of competition does PlacePlay face in the marketplace?

Morel: If you look at our program from a features and benefits perspective, we’re very different from, say, Apple’s Game Center which is Apple’s Xbox Live. Those gaming environments are great for global high scores, achievements, multiplayer functionality, etc., but it’s hard to use those network features to drive repeat usage and play. Leader boards are a great example here, they get really interesting if you are in the top two percent of users, but what if you’re 500,000 out of 1 million? Where is the fun or motivation in that?

What we’ve done is enable consumers to segment themselves into much smaller groups, so they have opportunities to compete with other people around them, like their friends, neighbors, class mates, family members, or colleagues. That’s a much more powerful, motivating force for a consumer than being one out of half a million.

Seattle24x7: So PlacePlay has been specifically developed to meet the needs of mobile game developers?

Morel: Right! What makes us different is that we recognize that mobile games are, in fact, mobile. Your mobile phone goes everywhere you do. But for the most part, mobile games have all functioned like everyone is at the same stationary console – the game doesn’t change based on where you are. With PlacePlay, it can. People are able to participate in local tournaments or pick up in-game elements from the places around them. It could be prizes, virtual currency, clues, or even virtual objects. And of course, the advertising offers can tie in. This is what makes PlacePlay different from everything else out there.

Seattle24x7: Is the monetization more effective that way?

Morel: Let me put it this way, we send checks. When a developer integrates local offers, and the other monetization features are put in place, their users click on them, we get paid from the ad networks, and we pay the developer as a partner. So when someone uses PlacePlay, they can tap into our local ad network and generate bigger numbers, like we’re seeing $1 to $8 for banner ads and up to $25 for local offers, compared to much lower rates from traditional mobile ad networks which typically hover between $.25 to a $1. 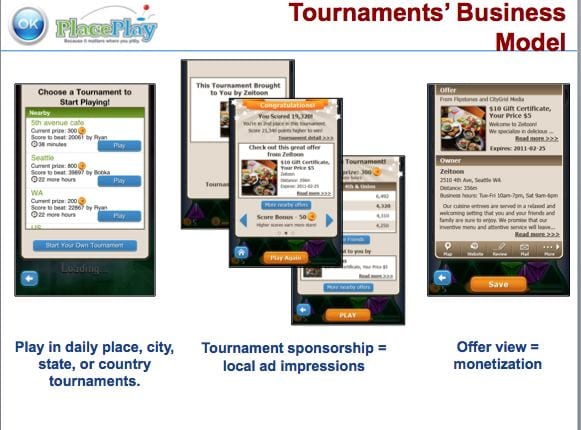 Seattle24x7: So PlacePlay is all about enabling “proximity marketing” for brands?

Morel: Yes, and what’s interesting is that there are other attributes that can define community besides location, so a tournament can be based on other shared characteristics, but proximity is a key driver for so many things on the commerce front. It’s about being a part of people’s lives when they are playing a game on their way to work or in a coffee shop in real time. Letting them share their game experience socially as they move between locations is a more social engagement. Let’s say you go play at a Starbucks five or six different times. Well, that Starbuck’s coffee shop might choose to pay you virtual currency based on how often you visit, or offer you other incentives to make or enhance a transaction.

Seattle24x7: What kind of implementations have your early developer partners done?

Morel: JoyBits Ltd., a mobile game developer and publisher based in St. Petersburg, Russia, was able to add PlacePlay to their Doodle God title, and will allow their users to link their real world with the virtual world of their game. This implicit bridge of the real and virtual world creates a richer game play experience and additional monetization opportunities. We’ve cited some other examples of eCPM and CTR performance on our blog that we’re excited about.

Seattle24x7: Seattle is a gaming hotbed. How can developers get started with PlacePlay and more importantly, generate more revenue from location-enabled ads in their titles?

Morel: The easiest way to get started is by downloading our SDK. Once they do that, opportunities are limitless. We’re still in the very early stages of testing the possibilities of local advertising and local mobile engagement. Companies from Google and Amazon to Groupon and FourSquare are demonstrating that potential every day.  [24×7]

The PlacePlay private beta is now open to the iOS developer community at large. The PlacePlay SDK, now available for iOS and shortly for Android, can be downloaded at www.placeplay.com.