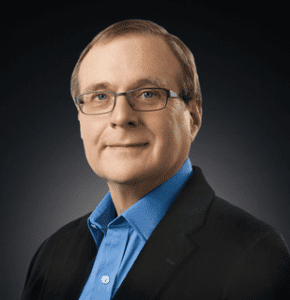 Paul G. Allen, the philanthropist, technologist, scientist, chief executive, musician, founder of the Allen Institute and the Allen Institute for Artificial Intelligence, Stratolaunch Systems, Vulcan, The Experience Music Project, the Living Computer Museum, and sports team owner of the NFL’s Seattle Seahawks, the Seattle Sounders, and the NBA’s Portland Trailblazers, has died at the age of 65.

In essence, Paul Allen was the man who did more to transform Seattle than any other human being in history, including Henry Yesler or Arthur Denny. His dynamic presence has sadly been taken from the legions of fans, friends, employees and community members who experienced the majestic and creative sphere of his influence.

Combining the patronage of a J. Paul Getty, Andrew Carnegie and his long-time business partner, Bill Gates, Allen was the intellectual architect of Seattle, transforming the skyline of the city, from MoPop (the Experience Music Project), to the Seattle Central Library, to CenturyLink Field, while also designing the infrastructure of new fields of research and endowing the future of the UW’s computer science program with the Paul G. Allen School of Computer Science & Engineering. Seattle mourns this titanic loss.

This is a time of profound loss for Mr. Allen’s family. On their behalf, Paul’s sister, Ms. Jody Allen, has released the following statement.

“My brother was a remarkable individual on every level. While most knew Paul Allen as a technologist and philanthropist, for us he was a much-loved brother and uncle, and an exceptional friend. Paul’s family and friends were blessed to experience his wit, warmth, his generosity and deep concern. For all the demands on his schedule, there was always time for family and friends. At this time of loss and grief for us – and so many others – we are profoundly grateful for the care and concern he demonstrated every day.”

STATEMENT ON BEHALF OF VULCAN INC. AND THE PAUL G. ALLEN NETWORK

“All of us who had the honor of working with Paul feel inexpressible loss today. He possessed a remarkable intellect and a passion to solve some of the world’s most difficult problems, with the conviction that creative thinking and new approaches could make profound and lasting impact.

Millions of people were touched by his generosity, his persistence in pursuit of a better world, and his drive to accomplish as much as he could with the time and resources at his disposal.

Paul’s life was diverse and lived with gusto. It reflected his myriad interests in technology, music and the arts, biosciences and artificial intelligence, conservation and in the power of shared experience – in a stadium or a neighborhood – to transform individual lives and whole communities.

Paul loved Seattle and the Pacific Northwest. The impact of Paul’s efforts can be seen here at every turn. But the true impact of his vision and generosity is evident around the globe.

Paul thoughtfully addressed how the many institutions he founded and supported would continue after he was no longer able to lead them. This isn’t the time to deal in those specifics as we focus on Paul’s family. We will continue to work on furthering Paul’s mission and the projects he entrusted to us. There are no changes imminent for Vulcan, the teams, the research institutes or museums.

Today we mourn our boss, mentor and friend whose 65 years were too short – and acknowledge the honor it has been to work alongside someone whose life transformed the world.”