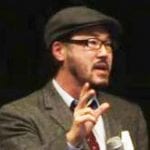 The fight to end global poverty is an epic struggle wrapped in a paradox. Eugene Cho has confronted  the reality distortion field first hand and has made it his mission to put it in the proper perspective.  To get real about poverty, according to Eugene, we need to understand how we fit in as fellow humans, and adopt the perspective of one person and one workday at a time.

Case in point:  You can’t put a price on the value of an education, as it is ultimately the only answer to what inflicts so many impoverished people. And yet, putting a price on education is absolutely essential.  It’s the only way we can help. By enabling people who are possessed of resources to think beyond the abstract concept of global education to the practical reality of a real day’s wages, both here and in a developing third world community, Eugene hopes to incite people to take the first step, just one day’s wages at a time.

It took just eight minutes to get the message across to the packed house at the Seattle Social Media Club during its December forum, where Eugene transported the 300+ in attendance to stand in his shoes inside the room of a Burma schoolhouse where he was meeting with the manager of the local school.  The school master had informed him that $40 was the pay which the average teacher earned at the school.

“You mean $40 a week?” Eugene queried.  The headmaster shook his head from side to side.  Reality distortion seemed to be playing tricks again  He doesn’t mean $40 a month does he?

“$40 a month?” Eugene asked. Again the headmaster bowed his head and signalled the opposite. Could it be for a quarter? the Seattle Social Media Club audience was asked to consider.

The reality? “$40 a YEAR?!” How many of us here in America are able or willing to think the unthinkable?

Eugene and wife Minhee are the founders of One Day’s Wages which they describe as “a movement of people, stories, and actions to alleviate extreme global poverty.”  Their strategy is to create a collaborative movement by integrating Human Relationships, Social Media/Technology, and the Power of Story.

Social media makes it possible to do something that was impossible before, according to Eugene. That is  to hold an ongoing conversation, be it a post, a tweet, or a comment, and keep the cause alive.  “If you say you’ve visited the Red Cross web site more than once, you are a liar,” he teased the Seattle audience of social media practitioners.

Social media is helping to propel One Day’s Wages in a variety of innovative ways.  With “Idea for a Cause,” the movement invites you to create your idea for supporting the cause.  For example,  host a house party, start a break dancing competition, run a marathon, host a fundraiser, donate engagement or wedding rings, host garage sales, and more.  ODW will create a Web page on the site dedicated to the idea as a springboard for enlisting support.  If the idea goes viral, and the coffers full up, the collaboration will have been considered a very successful one.

Or there’s“Groups for a Cause,” where friends, families, schools, churches, and other communities can mobilize their members, create their own group campaign and partner with ODW in raising awareness and funds to empower those living in extreme poverty. A few examples:  Students, faculty, and parents from Morrison Academy Kaohsiung (Taiwan) are raising funds for a water project for Cambodians schools and a orphanage in need of water.  New City Covenant Church’s campaign was created to raise funds for ODW’s Pakistan Flood Relief. The Marvista Elementary School gathered coins and other donations for Haiti.

The power of social media starts with a single individual. With “Birthday for a Cause,” you can create an actual personal page on the site several weeks before your birthday. In recognition of the special date, you could donate your single day’s wages on your birthday or make another donation to let others know that you’re not asking them to do something you’re not willing to do. By sharing and promoting your personal birthday event, you invite others to make it happen.

This summer, ODW put together its first album, “Songs for a Cause,” a special compilation of 21 unique songs including four never-before-released tracks by 21 amazing artists.  The album can be downloaded online for $10 .

The numbers are staggering and so daunting as to seem surreal. Approximately 600 million children live in extreme poverty. More than 1 billion people live on less than $1 a day and more than 2 billion live on less than $2 a day. 75 million children are out of school around the world, a figure equivalent to the entire primary school-aged population in Europe and North America.

And yet dollars alone are not the answer.   One Day’s Wages writes:  Money isn’t the solution – at least not by itself. The greatest resources are people.  Our voices matters. Our donations do make an impact when invested properly through organizations that are transparent, efficient, and strategic in not creating dependency but rather, creating opportunities and empowerment. Our pledge is that 100% of all your donations (minus transactions costs) go directly to projects and organizations doing amazing work to fight gobal poverty. Your donation doesn’t have to be through ODW…we don’t care. We just want to remind you that you can make a difference!”  [24×7]