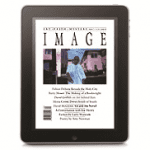 Poetry, Prose and PERL Make an Incredible Mark on the World of Language

by Madison B. Holup

Founded in 1891, Seattle Pacific University (SPU) shares some compelling links between the literary and digital worlds. A good number of these connections are exemplified by the award-winning literary journal published on campus and entitled Image. An acclaimed compendium of arts and letters in print, Image is also available online where, ironically, much of the language of the World Wide Web is written in PERL, a programming language created by SPU graduate Larry Wall.

Image was founded by Gregory and Suzanne Wolfe in 1989. Later, the journal would come to call Seattle Pacific its permanent home following a migration from the East Coast.

The acclaimed journal will celebrate its first 25 years this April, publishing its 80th compilation. Looking back in time, an esteemed cadre of literary lions has graced the pages and pixels of Image, including Annie Dillard, John Irving, Chaim Potok, Mary Oliver, Ann Patchett and John Updike.

A nonprofit literary and arts quarterly, Image is stationed at the intersection of art, faith, and mystery. Like the university, Image recognizes the place where secular meets sacred.

“Image speaks with equal force and relevance to the secular culture and to the church. By finding fresh ways for the imagination to embody religious truth and religious experience, Image challenges believers and nonbelievers alike,” Image maintains on their website. 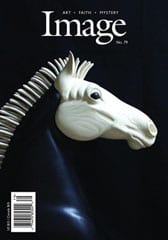 The publication explores this intertwined relationship, including fiction, poetry, painting, sculpture, architecture, film, music, interviews, and dance, opening its pages to those artists who grapple with religious belief and contemporary culture.

“When I proofread each issue of Image I am overwhelmed every time by the brilliance, heartbreaking courage, and sheer beauty of the art, poetry, fiction and interviews. It amazes me that there are individuals in the world so full of longing for “the permanent things” and the ability to express that longing honestly and artfully,” related co-founder Suzanne Wolfe in  an exclusive online interview.

Each year Image hosts an online forum called Arts and Faith, which facilitates discussion on topics such as film, music, literature, visual art, theater and dance, and television and radio, as well as general faith and life topics. The forum releases a Top 100 and Top 25 Film list each year, both overall and in specific categories. This year’s showcase features top 25 films that are all comedies. You can read all about the “Top 25 Divine Comedies” here. Film critics involved in Arts and Faith include Jeffrey Overstreet, Steven Greydanus, Peter T. Chattaway, and Michael Leary of Filmwell.

Image was also involved with the foundation of SPU’s MFA in creative writing program, launched back in 2005. This is the world’s first low-residency MFA program which combines writing with Christian conviction, taught by writers like Robert Clark, Jeanine Hathaway, Paula Huston, Gina Ochsner, Jeanne Murray Walker, and Lauren Winner. Undergraduate students from SPU, including this reporter, intern at the journal, managing the blog, sorting mail, and organizing events.

“I tell the students we interview for internships that the Image office is less like a salon and more like the shipping department at Amazon.com,” quipped co-founder Gregory Wolfe.

Image also offers a postgraduate fellowship for individuals looking to write their first novel or collection of writing. The chosen Milton Fellow will teach writing courses at Seattle Pacific while being given the time, space, and financial support to allow for the creation of his or her first book manuscript. 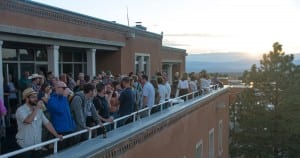 The journal conducts two art festivals every summer: Glen West and Glen East. These weeklong workshops are filled with an assortment of writers and artists. Glen West is located in Santa Fe, New Mexico and Glen East in South Hadley, Massachusetts. The participants are politically diverse, dedicated, and ecumenical. There is also Glen Online, a set of workshops offered over the web on poetry, fiction, and nonfiction.

In addition to publishing four journals a year, Image also possesses a daily blog, Good Letters, featuring a variety of bloggers with insights and experiences in abundance. Topics on Good Letters range from Breaking Bad to Pope Francis, delving into everything from “scientific privilege” to “truth in the absurd.”

As Image continues to publish recognized as well as emerging authors, their extensive reach into modern society and contributions to culture will continue to expand.

The journal can be subscribed to online and a sample of Image can be accessed here.