Urbanspoon, the leading mobile restaurant discovery application and reservation management system, has released its first annual Top High-End Restaurant List, recognizing the most highly acclaimed restaurants in the United States. The most comprehensive restaurant list of its kind, the list highlights 250 of the top restaurants across the nation, and is a result of analyzing more than 600,000 restaurants, millions of reviews from professional food critics, the

“We would like to congratulate this list of restaurants who stand out among all the high-end restaurants in the US,” said Kara Nortman, SVP of Consumer Businesses, CityGrid Media. “Based on restaurants that received the most favorable reviews from Urbanspoon’s critic, blogger and diner communities, the list truly highlights a myriad of establishments from the expected like the Bay Area’s French Laundry, to the unexpected places like Restaurant Iris in Memphis.”

The Urbanspoon Top High-End Restaurant List covers 36 states and 64 metropolitan areas including historically Food-loving cities like New York, San Francisco, and Chicago and highlights some smaller locations like Destin, Florida. The complete list can be viewed at http://www.urbanspoon.com/blog/82/Americas-Most-Popular-High-End-Restaurants.html. 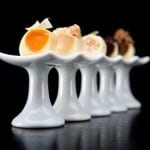 Restaurants on the Urbanspoon 2012 Top High-End Dining List were selected based on the number of aggregate blog posts on Urbanspoon; diner ‘up votes’ and ‘down votes;’ consumer reviews; critic reviews; and total page views.

The newly re-launched Urbanspoon app for iPhone can be downloaded for free in the iTunes store: http://itunes.apple.com/us/app/urbanspoon/id284708449