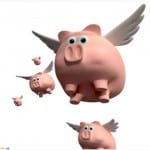 Amazon.com Inc., famous for eschewing short-term profit and plowing its money back into long-term investments, shook up the investor world this week with a blot of black ink in its latest quarterly earnings report.

Shares of Seattle’s commerce champ surged by more than 17% to over $566 in after-hours trading, pushing its market value well past that of rival, Wal-Mart Stores Inc., to about $264 billion, making Amazon the highest-valued company in retail in the world.

The company’s $92 million profit in the second quarter, on sales of $23.18 billion beat analysts’ forecast of a loss this time around and a more modest sales gain than the 19.9% Amazon posted.

Amazon had a lot to celebrate this quarter, according to founder and CEO, Jeff Bezos. The better-than-expected results came just a week after the company celebrated its 20th anniversary.

On Tuesday, Apple’s market capitalization lost some $60 billion within minutes of reporting a 38% jump in profit but lighter-than-expected iPhone sales. And Google last week pleased investors with strong results and talk of tighter cost controls, sending its market value Revenue from its cloud operations – Amazon Web Services – nearly doubled in the second quarter, which analysts said showed the firm was now well positioned to grow.

Deutsche Bank analyst Ross Sandler said the fact that Amazon was increasing revenue and margins – the amount of money it makes after costs – was a “magical trend” that was being “rightfully rewarded”.

“After questioning the investment rationale for years, Amazon is seeing the fruits of its labors in both revenue growth and operating margin,” Sandler wrote in a note to clients.

Barclays analyst Paul Vogel said it was now optimistic rather than cautious on the company’s growth prospects.

“The scale of their distribution network is starting to generate better incremental margins,” he added.

Amazon chief financial officer Brian Olsavsky told investors that the trend would continue as the company would continue to invest in “things that we think are big and important” while keeping costs under control. [24×7]