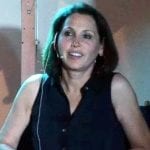 The Seattle Social Media Club closed out its summer season by closing the generation gap. The Gen-Z gap in fact!  The teachable moment and the marketing momentum even featured a “champion” for social change.  She is Lockerz’ CEO Kathy Savvit.

“I’m a little bit of an odd story to be a second-time startup CEO,” said Savitt. “The first time I was in my late twenties. I essentially started a global marketing agency here in Seattle which we sold to Interpublic in 2000. Amazon had become a client, and I worked with Amazon and Jeff Bezos closely to launch Free Super-Saver Shipping which was a very novel idea back in 2002. I wound up joining Amazon in 2002 to run worldwide marketing.  That was the first time I laid eyes on the impact of Generation-Z.”

“At that time, these 12 and 13 year olds were using the Web in ways that I, as a demographics geek, had never seen before in my life. They were more sophisticated than even Amazon customers!  After becoming sufficiently obsessed for the next couple of years,  I made a move to American Eagle Outfitters to be their EVP because I had to follow Gen-Z.”

Following that trajectory, Kathy, who had also joined the board of directors of Liberty Media Interactive, (which owns Sirius/XM and Starz and has vast Internet holdings), wrote a white paper that laid out the future of online marketing and Gen-Z.  Her vision was like a tractor beam with a lock on e-commerce.  She was told by the board’s chair she had all the backing she wanted to launch the business that became Lockerz.

What is it about Gen-Z that so captivated Savitt? How is Lockerz positioned to become a part of this new curatorial generation of shoppers? And how should your business adapt to the seismic change that Gen-Z is making in online e-tail and electronic commerce?

Our reporters took copious notes at what had to be the most idea-potent social seminar of the summer season.

Who is Gen-Z and Why Is It So Disruptive?

Gen-Z has taken a curatorial approach to life and they’ve brought it to the mall.  If you ask a Baby Boomer or a Gen-X’er to do some online shopping they have a particular process they go through out of habit, where they have specific accounts and stuff set up. That’s not the way Gen-Z approaches it by default.

The average Gen-Z’er has 3+ windows open at any time. There is no notion of a home page.  They typically have some sort of social networking site open. They typically have some form of entertainment, whether it’s a YouTube or Hulu or Funny or Die, and then they have some form of consumptive behavior. The consumption could be on the gaming space, it could be on a shopping site or it could be on a free prize site. Those are usually the three windows. “When we say we want to be the destination or the home page for Gen-Z, we just want to be one of the three,” says Savitt. ” That share of voice, being part of that “consideration set” is super-important when you want to reach Gen-Z!”

For example, Gen-Z’ers may have an Amazon session, but instead they’re going to look for inspiration based on their friends and the people who influence them,. They might look to Tumblr. They might go to Facebook to see what people are doing. They may go to Refinery 29. They may be looking at Polyvore. They may be looking at Lockerz. From there, they figure out how do I curate or source that good or that experience.

The Characteristics of Gen-Z

* The most “curatorial” generation in modern history. Meaning, they are curators of the things they are passionate about.

* They are wildly expressive. They can’t stop talking aboui it, or sharing it.

* You can’t isolate Gen-Z  as a class. They’re actually dictating Gen-Y and Gen-Z. behavior. It used to be that kids aspired to be older. Today’s older bothers, sisters and Moms are aspiring down to the curatorial behavior of Gen-Z.

*  If there is one take-away,  says Saviit, it is to “allow your brand to be curated.” It’s going to happen anyway.  Make it as easy and powerful a product to curate as possible and you’ll have a leg up and great product experiences will be even better.

How do you allow a brand to be curated?

The first thing is that you want to do is make your Web presence as searchable or crawlable as possible. The notion of optimizing for search is very important. You want align yourself with as many different social players as possible. It is not enough just to get Facebook “Likes.” You don’t own that customer data. You won’t be able to see that click stream analysis. It is very helpful to find partners, whether it’s a Lockerz or another company, that are going to help you grow your local profile and allow you to own new customers not just communicate in a trapped environment.

“One of the things were’ doing at Lockerz,” said Saviit,  “is we’re trying to build that ultimate social commerce tool. So not only when you’re a merchant or you partner with us, do you get to see do you get to see your friends on Facebook or your Followers on Twitter.

At Lockers we call them “FWB’s,” or “Friends with Benefits.”  Not only can you see what they are buying but what they are shopping on that page, which gives you the closest real-time experience to shopping at a mall.  Remember, the reason that shopping is so pleasurable in many ways for teenagers and college kids is that it’s a major form of social interaction.”

Lockerz allows you to not only see what your friends are up to, but to earn a decal for virtually anything you do at the site. So anything you watch on Lockerz, anything you shop for or you buy, you earn a decal.  You can go and visit a friend’s Locker and when you click on her music decals, she earns points from monetizing her great taste in music and you get sent to those music videos and earn those decals yourself . You also  get to explore new things.

This tool is a expression vehicle where Lockerz members can tell the world that these are the brands and the music that I really love and I should be rewarded for my particular “cool” within my circle.

Lockerz can actually communicate to the customer directly through their decals. If you actually accept a Decal, you’re allowing the merchant to talk to you again through that decal. The decal lights up with a special offer where we actually give you an announcement in your “hallway.”   Our feeling is this: “Let them opt-in to you.” [24×7]