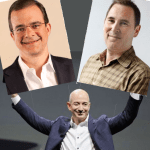 Two heads are better than one, or so states a proverb in the old English tongue.  So what if the number of crowns is three and the first happens to be the gleaming pate of one Jeff Bezos?  In a CEO trifecta, two of Amazon’s most successful business leaders, the heads of Amazon Retail and Amazon Web Services, have been elevated to join Amazon chairman Jeff Bezos in the position of CEO.

In a letter to shareholders, the founder noted the growth of the company under the leadership of Jeff Wilkie and Andy Jassy. “AWS, Marketplace and Prime are examples of bold bets at Amazon that worked, and we’re fortunate to have those three big pillars,” he wrote. The actions are “not a reorganization” the company hastened to add. 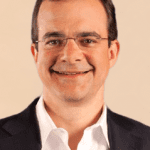 Jeff Wilkie who holds a bachelor’s degree in chemical engineering from Princeton, and studied total quality and process improvement while pursuing his MBA at MIT, joined Amazon as vice president and general manager of operations in 1999. He became SVP for worldwide operations in 2002 ascending to SVP for North America retail in 2007,  then became SVP of the Consumer Business unit in February of 2012. 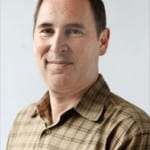 Andy Jassy  earned his MBA at the Harvard Business School and went to work for Amazon in 2003 as an aide and chief of staff to Bezos. He has assumed the “Steve Jobs-like” presenter role at the annual AWS developer and user group meeting in Las Vegas each fall.  Jassy has made the bold prediction that AWS revenues may one day surpass the company’s retail operations.

To wit, AWS has been growing at a rate twice that of the parent company, seeing revenue amount to $7.9 billion out of Amazon’s total of $107 billion. Amazon’s infrastructure has become a commodity scalable service using the experience it gained in creating its online stores.  One of Jassy’s favorite sayings is that “there is no compression algorithm for experience.”

Does the appointment of two new CEOs forecast a succession strategy for Amazon?  In Dec. 2014, Bezos said at a conference that Amazon did indeed have a succession plan, but called it a “secret.”  Could elevating the captains of these vital business units herald a possible spin-off?