If you haven’t yet discovered the Take Control catalogue of eBooks, the easiest-to-grok, human-sized, How To trail guides of the most popular hardware and software products on the planet, well, you really ought to exercise more control over your high-tech lifestyle.  From digital cameras to smartphones, to the sweet i-Suite of  iTunes, iPods, iPads and iPhones, Take Control puts you firmly in control of some of the most coveted accessories in the digital domain.

Like the native Fodor’s and Michelin guides are to the backroads of travel, Take Control eBooks are highly regarded as virtual walking tours through Techdom (and not solely the Apple kingdom). The trusty software and hardware companions guide you, step-by-step, along the switchback trails that run the gauntlet of technology’s cliffs, from making a pre-purchase decision to gleaning the first impressions of a new product’s “unboxing,” to uncovering gem-like usage tips, hints and insights that make the most of electronic productivity.

Publishers Adam and Tonya Engst got started here in the Northwest corner, where Adam authored one of the first Internet Start-up Kits (of the same name) and was ranked  just a couple of stations after Steve Jobs as the most respected Mac pundit in the free world. Seattle was the original hub of the pace-setting TidBITS newsletter, publishing Apple news worldwide and featuring such regular contributors as Glenn Fleishman and Jeff Carlson, two digital sherpas who still call the Puget Sound home.

Fast-forward to 1.11.11, and the announcement of the iPhone as the latest member of the Verizon family. At this scenic overlook on the trail, we’re pleased to introduce you to your  iPhone Take Control guide. Meet Karen G. Anderson, the Northwest author of Take Control of iPhone Basics, now including both the AT&T and now the Verizon variety.  We caught up with Karen on the momentous occasion of the iPhone’s Verizon debut to  “take control” of the situation and get Karen’s take on the future of the iPhone experience. 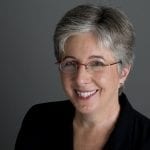 Seattle24x7: What is the question you are asked most often about the iPhone?
Anderson: It depends on who’s asking! People who don’t already own smartphones asked me if they’ll like an iPhone better than an Android. I tell them that if all you want to do is make phone calls and take some pictures, you’ll be happy with either one. But if you want to keep your email, contacts, and calendar in sync between your iPhone, the cloud, and multiple computers, or if you’re concerned about security issues involving third-party apps, I recommend the iPhone. Of course, if you have problems with AT&T and Verizon reception in your area, don’t rush out and buy an iPhone!

People who own iPhone 3GS models ask me if they need to upgrade to the iPhone 4. That’s a tricky one. The iPhone 3GS is a great phone, and also highly affordable. Since it uses all the latest Apple software (iOS 4) the only reasons to upgrade are if you want the better camera and video capabilities and FaceTime phone calls. That said, once I tried out the new 5-megapixel camera on the iPhone 4, I couldn’t imagine going back to the iPhone 3GS.

Finally, people who own the iPhone 4 ask me if they need to buy my eBook! If you’re a power user, no, you don’t need the book. But if the iPhone is your first smart phone, or if you feel as though you could be doing more with the iPhone you’ve got, you want the book. It’s going to get you comfortable with things like syncing music with iTunes on your computer, making ringtones, or setting up multiple mail accounts.

Seattle24x7: Are you an iPhone power user? How many apps do you have on your iPhone? How many folders?
Anderson:  I think of iPhone power users as the folks who have fearlessly jailbroken their iPhones and lived to tell about it. I’d give myself about 4 stars out of 5. I have 150 apps and 14 folders. Mostly I use the folders to hold the apps that I tested for the eBook and that I don’t use very often! That would include the dozen or so “off beat” apps I reviewed for Gene Steinberg’s “Tech Night Owl” radio show. Some of those were just plain weird.

Seattle24x7: What is your favorite iPhone app for work and for fun?
Anderson: For work, it’s JotNot Pro. I use it to take pictures of documents I can then email (as PDFs) or fax to people. It’s like carrying a scanner everywhere with me.

For fun? Ship Finder. Our house has a modest view of Puget Sound and we can see ships going by. Ship Finder shows me real-time GPS information, so I can tap on the ship’s image and get information on what type of ship it is and where it’s going. Ship Finder is also fun to use if you’re racing to catch a ferry!

Seattle24x7: What percentage of the network difficulties that have plagued the iPhone are AT&T-related what what percentage are due to the fact that iPhone users tend to use so many features compared to other phones or smartphones?
Anderson: I wouldn’t venture an estimate. But I will say that the AT&T reception problems are very real, and unfortunate. I don’t blame people who live in areas with bad AT&T reception for souring on the iPhone. It will be interesting to see the impact of a Verizon iPhone; you have to wonder how many potential iPhone customers have already given up and gotten other types of smart phones.

Seattle24x7: Do you think that success of the iPhone and iOS4 will usher in a revolution in touch screen computing?
Anderson: Absolutely “yes!” And the iPad has only magnified this trend. Nearly every iPhone user I know reported that after using the iPhone he or she later attempted to tap a traditional computer screen instead of using the keyboard. The touch screen is a revolution, and the accuracy with which the iPhone interprets human touch continues to feel like magic to me.

Seattle24x7: Has the iPhone 4 had a similiar efect on the new App-based revolution?
Anderson: The applications development field for computer software had been getting narrower and narrower in recent years, as Microsoft and Apple brought more and more of what had been third-party software (like backup software, and web design software) in-house and more of the work we used to do with software became Web-based. The advent of the iPhone and Android operating systems blew the whole software development field wide open again. I’m thrilled with how many people I know are developing iPhone apps, and how great some of those apps are. Can I put in a plug for the children’s game HootDunnit and the brilliant application designed for Northwest Folklife last year? Both done by small companies, both top-notch apps. Another great one is Pickin’ Chicken. I’m serious.

Seattle24x7: Take Control Publishing seems to have found the “sweet spot” for the right size “How to” manual. How would you describe the TakeControl publishing mission?
Anderson: I’d say Take Control’s publishing mission is about giving people technology information they can trust in a format that makes sense. The Take Control Ebook format means the information is instantly available, easy to store or carry around with you, relatively inexpensive, continuously updated — and environmentally sustainable, too.

Seattle: How would you sum up the iPhone’s remarkable success?
Anderson: One reason I think the iPhone stands apart from competing smart phones is that it has a meaningful, easy-to-remember name. I mean, if you were new to the smart phone, would you go to the store and ask for an “HTC HD2”? Or would you ask for “the iPhone”?

I was looking at Tech Republic’s recent list of the 10 best smartphones of 2010, and shaking my head over some of the dumb names. Like the Blackberry Torch (“Hold on guys, I forgot my torch!”). And then there’s the Motorola Droid 2, Droid Pro, Droid 2 Global, and Droid X. It’s bad enough that the name Motorola sounds like your grandfather’s television set; the models sound like out-takes from Star Wars. Then we have the Samsung Focus, which sounds like a camera, and the HTC Incredible and the HTC Desire, which sound like — oh, let’s not go there. Seriously, the biggest problem with the Android name is that people aren’t sure if it’s a phone or an operating system. Geeks buy operating systems, but mainstream consumers are just trying to buy a phone. And the iPhone gets that. [24×7]

Check out the complete library of Take Control eBooks at http://www.takecontrolbooks.com/

Karen’s blog of iPhone 4 Tips can be savored at http://iphone4tips.wordpress.com/