As program manager for the Mars Exploration Program for NASA, Donna was the original leader of the team that built the highly acclaimed Mars Pathfinder rover, landing a vehicle and several instruments on the surface of the Red Planet in 1997. For that historic mission, Donna also helped oversee the creation of a Website that came to represent a defining moment for the Internet, the first virtual Web connection between the public at large in cyberspace and information being gathered and transmitted from the farthest reaches of outer space.

For Donna, the path which led to NASA, and eventually to her new home in Seattle, (Donna has settled in Wallingford) began in the science fiction book aisle of her hometown library in Wynnewood, Oklahoma. It was there she became spellbound by the library’s only copy of Ray Bradbury’s Martian Chronicles. Now Donna aims to lead others down the same path that traverses between science fiction and science fact as Director of Seattle’s new $20 million science fiction showplace, situated inside the swooping architecture of the Experience Music Project, a few steps from the Seattle Space Needle.

Spreading out over 13,000 square feet, the Science Fiction Museum and Hall of Fame traces the literary saga of science fiction, from its interstellar journeys to its futuristic worlds and alien creatures. Like an interplanetary gallery of the future, there is a showcase of artifacts that surround the walls including imaginary 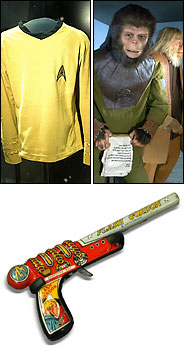 weapons, phasers and ray guns to monstrous specimens like the 19-foot-long model of the reptilian creature from the 1986 sci-fli classic, “Aliens.” At Homeport, fans can peer out from the portholes of a space station and gaze at the most famous spacecraft of the genre.

Given that her latest interplanetary mission chronicles decades of effort imagination, Ms. Shirley intends to fully utilize the Internet as her latest sci-fi launch vehicle.

We caught up with Donna just after she had returned from the historic test-flight of SpaceShipOne from the Mojave Airport, the historic privately-built space plane sponsored by her new employer, Microsoft, EMP and Sci-Fi Museum founder, Mr. Paul Allen.

Seattle24x7: Donna, tell us about the plans for the Website of the new Science Fiction Museum and Hall of Fame? You already have included a definitive lineup of links to Sci-Fi related discussion groups and clubs from around the country.

Shirley: At SFhomeworld.org, Brooks Pecks, our Content Director, has brought together links with literally hundreds of different sites. We’re connected in with Scifi.com, we’re connected in LocusMag.com which is the leading science fiction magazine for people who write science fiction and we’re of course hooked in with the Mars Exploration Rover homepage which I look at at least once a day.

When you go the Exhibit Gallery on the site, there are a zillion books in our exhibits and [in SFM Recommends] there is a list of all the books, magazines, moves and other media references for each of the exhibits. So for instance, if you went to Spacedock, you’d see books about spaceships, and you’d see movies about spaceships including Buck Rogers and Cowboy BeBop and Starship Troopers. [Under “Media,” is a library of Video/DVD, Games, TV and Sci-Fi Movie hyperlinks – Ed.]

You can go to the current Mars Exploration Rover Website and you’ll see the daily updates. There’s the Spirit update, the Opportunity Update, the Week in Review Slideshow. You can click on multimedia and see the latest pictures. Or you can click on people and get information about the various people working on the project. The Website contains recommendations from all of our Advisors for preferred books.

Seattle24x7: What kind of content will you be adding as things progress?
Shirley: One of the things that Leslie Howle, our Education and Outreach Manager is doing is that he’s approached several science fiction writers to give us stories so that we can post original work on the Web. We’re also going to have ways for kids to write science fiction stories themselves, or at least finish the endings of stories from other writers. We plan to have a lot of Web activity and it will really be a focal point for our education program.

Seattle24x7: Does the Museum and Hall of Fame have plans to do actual cybercasting in the future?
Shirley: We would like to do audio-video Webcasting in the future. We are making some proposals to the National Science Foundation for funding so that we can expand the use of the site. For instance, we plan to have a lot of lecture series, debates between scientists and science fiction writers, and media people. We just had one with the Ames Research Center down in California debating whether you should “terraform” Mars, that is turn Mars into something like the earth? We had Kim Stanley Robinson – (Hugo & Nebula award-winning author of the “Mars Trilogy”), Arthur C. Clarke – (author of “2001, A Space Odyssey” and Greg Bear – (Hugo & Nebula award-winning author of “Moving Mars”) and then 3 or 4 scientists on the science side. It was a fascinating debate that is now up on the NASA astrobiology Webpage.

Seattle24x7: Does Sir Arthur C . Clarke still commute from Sri Lanka via the Internet?
Shirley: Yes, although in this case he came in by telephone. I email with Arthur probably about once a week.

Seattle24x7: What was your experience like watching the launch of SpaceShipOne?
Shirley: It was very exciting and momentous because this represents a new era of space transportation and it’s something we’ve need for a long time. In fact, I was testifying to Congress back in March that the nation needs to pay more attention to the private launch sector and remove some of the barriers to private launches or we’ll never get the launch costs down. This is a huge step.

Seattle24x7: Speaking of Sci-Fi, did you meet up with Bill Shatner who was attending the SpaceShipone launch?
Shirley: I ran into him but didn’t talk to him. I did run into Dennis Tito and talked to Dennis who was the first civilian to pay his own way into space. Dennis and I used to work right across the hall from each other at JPL.

The Science Fiction Museum and Hall of Fame is at http://www.SFhomeworld.org

From Mars to The Space Needle: Former NASA Mars Explorer Donna Shirley is the Director of the Science Fiction Musuem and Hall of Fame orbiting just below Seattle’s Space Needle.