The game is immersive, based on augmented reality. But the stock surge of Kyoto, Japan-based Nintendo is all too real. Nintendo North America, which is headquartered in Redmond, saw its stock soar nearly 25 percent Monday after the release of  “Pokémon Go,” which directs its users to explore their physical surroundings to find, catch and train Pokémon characters.

The boost in share price Monday allowed Nintendo to reach a market value of nearly $28 billion, a $7.5 billion increase in just a day. “Pokemon Go” already had more downloads than the popular dating site Tinder and was already poised to surpass Twitter in daily active users on Android devices. It ranked above Facebook, Snapchat and Instagram in the Google Play store.

Nintendo is an investor in the two firms that actually created the game: Tokyo-based Pokémon Co., which has an office in Bellevue, and recent Google spinoff Niantic, based in SFO.

A report by Luke Kawa for Bloomberg stated that the game already has more active users than Snapchat or WhatsApp, having rocketed to the top of the App Store charts at a record pace. Indeed, while the game’s success has immediately excited investors in Nintendo, the success of the title benefits Apple as the merchant in the transaction.

Based on revenue splits, Macquarie Capital Securities analyst David Gibson noted, “out of every 100 units earned at the App Store, 30 would go to Apple, 30 to Niantic, 30 to Pokemon and 10 to Nintendo.“

The original concept for the game came in 2014, when Google Maps paired with Pokémon to give people a chance to catch creatures on its maps app. Niantic liked the idea so much, it approached Pokémon with the idea for what we now know as “Pokémon Go.

“Pokémon Go’s” first few days have proved wildly popular, so much so that users have gone online to complain that the app is freezing or quitting, likely from overloaded servers.

The phenomenon pushed past the usual lines of containment so quickly that police in the town of Duvall issued an advisory – albeit tongue in cheek:

“We have had some people playing the game behind the PD, in the dark, popping out of bushes, etc. This is high on our list of things that are not cool right now,” Duvall police cautioned. Instead, they advised, gamers should “come on in to the lobby … and let someone behind the counter or an officer know you are looking for an imaginary critter thing.” 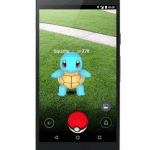 Users have been hunting down Pokemon in offices, schools, hospitals and backyards. Many come together in parks and at well-known landmarks in their quest to electronically gather Pokeballs.

The balls are then hurled at the game’s pocket monsters to capture them. Players often visit sites such as churches, which digitally become “gyms,” where battles are fought. With 150 Pokemon to collect — plus the chance to rumble with opposing players — “Go” stands to energize the “Pokemon” franchise, which includes playing cards and cartoon shows.

Washington state’s Department of Transportation has warned against “Pokemoning” while driving. [24×7]