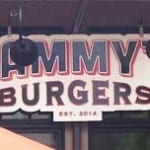 If it satisfies your hunger to know that Bainbridge Island was lauded as Google’s pick city for the 2014 eCity of the Year in Washington state, congratulations, you’re a geek!

If it also tickles your taste buds to learn that you can set your Google Map search query for Hammy’s Burgers, the latest culinary attraction on the sidewalk promenade bracketing Bainbridge Island’s charming Pleasant Beach Village, and the latest chapter in the storybook town known as Lynwood, Wa., (a short jaunt from the ferry by car) — bon appétit, you’re a geek and a foodie!

On the south side of the island, about five miles from the ferry dock, you might not expect for a lovely hamlet named Lynwood to be the arbiter, and the incubator, of new tastes for the educated, Northwest palette. The township was only known for the buttered popcorn and seasonings at its historic movie theater (opened in 1936), and the hillside Pleasant Beach House restaurant perched on a bluff above the city’s corridor.  It took owner John Jacobi to finish  the better burgh (and burger) with Pleasant Beach Village. He took over the complex with an initial $10 million investment.  With its dancing fountains, novel sculpture and sunny outdoor dining, the quaint, tudor-style environment feels like a slice of Disney’s Magic Kingdom. 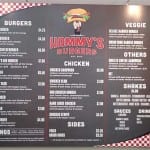 Hammy’s chef, Ryan Welch, who helps host the establishment with wife Amber Welch, whetted his taste for comfort foods and microbrews after formal training at the Le Cordon Bleu School in Portland, Oregon. A native Northwesterner he grew up around Sub Base Bangor and took a turn running the Hale’s Brew Pub kitchen at the Kitsap Mall. 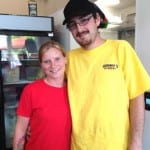 Hammy’s burgers are tender, juicy and cook up from fresh, never frozen, beef with a choice of gourmet sauces, from basil mayo to spicy, Jack Daniel’s barbecue sauce, to the Hammy’s house sauce. Hammy’s Burgers also makes the consummate chicken filet burger in several varieties including Maui teriyaki and a zesty Chicken Club with pepper bacon. All sandwiches are served with the same crisp, thin french fries people seem to prefer, plus gourmet milkshake choices that McDonald’s can only dream about: Blackberry, Coffee Mocha, Peanut Butter, Mint, Butterscotch, Root Beet, Caramel and Oreo round out the exotic shake flavors on tip of the standards.

Across the street from the friendly “Happy Days” style interior of Hammy’s and the umbrella-tabled sidewalk dining, sits the Treehouse Cafe, an italian bistro, bar and and billiard parlor with lots of  al fresco dinging. On the same block you will find Lynwood’s artisan bakery, and the Farm Store for Heyday Farms, featuring all home-grown, organic produce, plus milk, eggs, cheese, onto steaks and links, locally produced just a few blocks from the store. It just doesn’t get any fresher than an island ecosystem to create a culinary sensation.

Seattle’s upscale island neighborhoods have experienced a culinary crescendo in recent months, a glissando of gastronomic goodies that makes a bite of Bainbridge something to sink your teeth into seven days a week.. Only now the “must-see,” “must taste” dining destinations are island-wide!

Within a stroll of the island ferry terminal is the new Bainbridge Island Art Museum with its own bistro mixing island art with soups, salads and small plate dishes. Directly across from the museum’s front door is the new Island Ale House sporting a connoisseur’s collection of Northwest microbrews. Caddy corner to the new museum complex is the classic Streamliner Diner, now offering a pop-up dinner menu created by visiting Seattle gourmet chefs.

Stroll to the end of Winslow Way and you;ll encounter with what may be the smallest vegetarian restaurant in the world, the island-cherished, organic cornerstone of Winslow Way and Madison Avenue known as Emmy’s Veggie House. On the opposite corner of Winslow’s “Main street,” is the long-time island standard-bearer, Cafe Nola, known for Michelin-standard platings and festive Bloody Mary’s.  A few doors down is the Hitchcock Restaurant, Deli and Charcuterie.

Around the corner from main street in the direction of Eagle Harbor Marina is Ye’ Olde’ Public House, the ever-popular gastropub with an organic food kitchen stowed below the first floor bar and large outdoor deck seating (keeping the acoustics a bit queiter).  The hallmark of fresh food is when it is printed on a menu. The ink in this case is never dry. So it is with “The Pub’s” tabloid-size, newsprinted menu.

Dotting the landscape are a host of well-stocked espresso and baked-good “fuel stops” for visitors and islanders alike.  The most prominent are Bainbridge Bakers at the Winslow Green, Blackbird Bakery on the main drag, the Rooster Cafe and the legendary Pegasus Coffee down Madison avenue to the waterfront.

A short drive past the town library and high school and  will take you to the Coppertop office park, home of Bainbridge Island Brewery and Bainbirdge Island  Distillery to lift your spirits with your glasses. Within strolling distance of the town’s centerpoint are now four , count ’em, four wine tasting rooms.

Bainbridge Island’s scenic vistas and ferry crossings have always been a feast for the eyes. Now its new collection of artisan eateries are a feast for the hungry Puget Sound family. Bon voyage for Bainbridge, and bon appétit! [24×7]