Imitation may be the sincerest form of flattery but Seattle podcaster Aaron Roden, host of the weekly Air-Raid Podcast, a part of the fledgling KIRO radio podcast network, had no intention of mimicking Marc Maron’s celebrated streaming interview show when he began his podcast in 2010. Roden’s lesser-known, home-based studio, situated at the time in Greenwood, was nine-hundred miles from Maron’s infamous garage studio in southern California’s Highland Park.

Yet the similarities are striking.

The Podcasters: Aaron and Marc both play a mean electric guitar (Aaron’s Seattle band was known as The Yüzh), and both share their homes with cats. The two hosts also do live events. Aaron has emceed the annual, nerd-rock variety show known as KRACKLEFEST at Emerald City Comicon and the Timber Music Festival in Carnation. Last year, show fans could also catch live, sold-out Air-Raid shows at the Naked City Brewery & Taphouse in Greenwood.

The Podcast Format: A combination of musicians and comedians, Air-Raid leans more toward the current music scene and sprinkles in a few comics while Maron’s WTF covers musicians and has built a kind of audio anthology of American comedians.

The Podcast Guests: Both have done in-person interviews with comedians like Dana Gould, Mike Birbiglia, Aisha Tyler, Bob Saget, Jim Breuer, Eddie Pepitone, and the beat goes on. For Roden, booking guests means catching comics on their “road shows” while they are visiting Seattle. 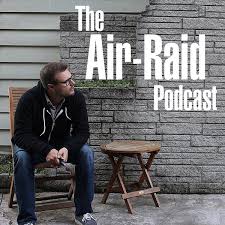 One key difference is the host’s offline vocations —during the day, Maron is a standup comic and TV writer-actor-producer, Roden is a geologist.

“I get emails sometimes from people who are angry that I have co-opted [Maron’s] format,” says Aaron. “My talking style is fairly similar, but the content is definitely not the same. We take musical breaks during the show and feature music from new bands that we like.”

“I am not famous,” Aaron intones modestly, “so finding an audience has always relied more on ‘word-of-mouth‘ than any notoriety.”

Air-Raid audience members have not been shy about suggesting guests like Sean Nelson of Harvey Danger, an early request who was one of the first musical guests. Air-Raid has also hosted conversations with Mike Mcready of Pearl Jam, Chris Walla of Death Cab for Cutie, and Duff McKagan of Guns and Roses to name but a few of the musical artists.

Roden credits humorist Luke Burbank and the Seattle-based podcast, Too Beautiful to Live as role models. One of the earliest show guests and a generous advisor, Burbank was a local podcasting success story out of Port Townsend and today commutes between Portland, OR, where he does a LiveWire radio show for NPR and his daily TTBL podcast in Seattle.

Seattle podcasting began in earnest, if not embryonic fashion, when Fisher Communications launched NoizBeam, a collection of local podcasts targeting the 18-49 demographic. By collecting under one roof the already established fan bases of shows like The Air-Raid Podcast, Stack of Dimes, The Grapes of Rad, Unload with Madge and Dave, Planned Brotherhood and The Sibling Rivalry, NoizBeam partnered podcasts had the chance to cross-promote one another by appearing on other programs in the NoizBeam network. The potential to grow into a successful national enterprise was short-lived, however, and the venture was dissolved.

Meanwhile KIRO radio was in the practice of archiving each of its radio programs on Seattle Talk Radio 97.3 FM as well as 710 KIRO Sports AM Radio. This reboot of Seattle podcasting 2.0 adopted many of the NoizBeam shows to a new perch on MyNorthwest.com while adding new shows like GeekWire to the lineup.

Will Roden ever interview Maron, or vice-versa? While the parallels are purely coincidental, Aaron could not have assembled, or resembled, a more successful template for podcasting than Maron’s “WTF” which recently played host to President Barrack Obama, a major podcasting milestone.

Ultimately, both Roden and Maron do podcasting for no other reason than it is something they love. The bliss they have followed just happens to extend to opposite ends of Interstate-5. [24×7]

Visit the Air-Raid Podcast home page or follow the show on iTunes.