Your Journey into XR Development – Careers in Mixed Reality – eps.9 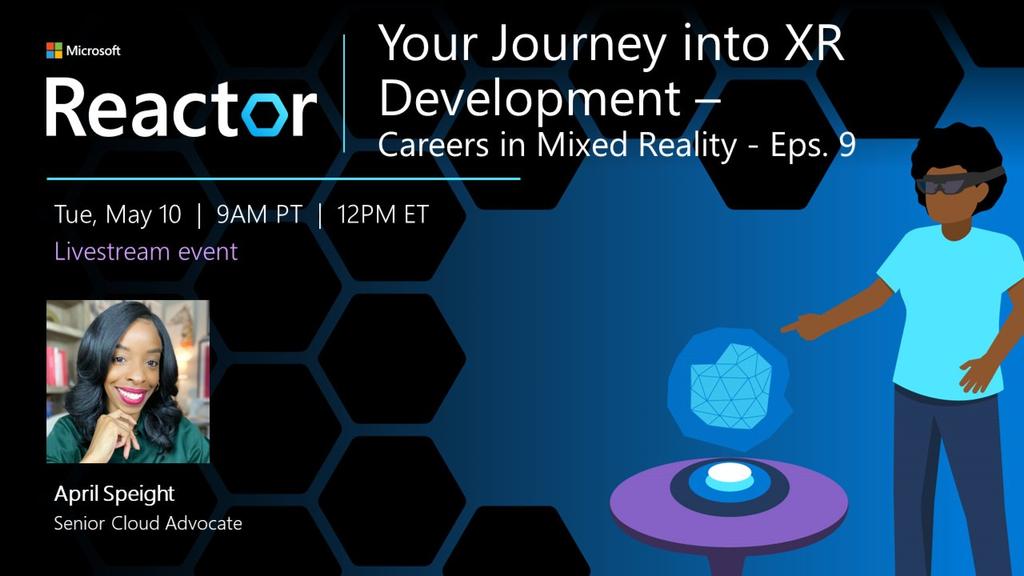 Our Mixed Reality and Spatial Computing Cloud Advocacy teams have come together to bring you a 10-part series dedicated to helping you get started with your XR development journey. Created with the true beginner in mind, this series has been curated to guide you along your journey in getting started with XR featuring sessions for both developers and non-developers alike. Join us for our biweekly Microsoft Reactor series where we’ll explore a different area of XR development. Be sure to register for the Introduction to XR series events as they’re announced!

Join us for a panel discussion to learn more about careers in XR. During this live event, we’ll meet with members from the Mixed Reality team at Microsoft who’ll share their experiences from working in the industry. We’ll also hear from recruiters to learn more about how you can set yourself up for success to find your next role in XR.

Moderator:
April Speight, Sr. Cloud Advocate – Spatial Computing
April Speight is a developer, speaker, and educator who believes that creating for XR should be accessible for all. She leads the Spatial Computing Cloud Advocacy team at Microsoft. In addition, she is also the Director of Community and Education Outreach for the CyberXR Coalition – an organization formed to address the global necessity of diversity, equity, and inclusion in the cybersecurity and XR domain.

Panelists:
Nick Klingensmith, StereoKit Primary Maintainer
Nick Klingensmith specializes in tool development, graphics programming, MR, and OpenXR! With over 100 published games, he’s worked on small arcade games, mobile GPU pushing titles, all the way to massively networked social games. The tools he’s published on the Unity Asset Store are also used in thousands of games, on just about every modern platform imaginable! Nick works for Microsoft on the Mixed Reality Middleware team, and is the author of StereoKit the Mixed Reality Engine, and the Mixed Reality Lighting Tools.