Hardware grabbed much of the attention this week at Google I/O, the company’s annual developers’ conference, thanks to a number of highly anticipated product launches. Our correspondents give you a first look at the new Pixel Watch, details on the Pixel 6A phone and Pixel Buds Pro, a peek at the Pixel 7 phone series, an Android-powered Pixel Tablet and yet another take at Google AR Glasses, these specs aimed at language translation.

Despite all the shiny new objects, the I/O event is still fundamentally a software affair. To that end, Google used its keynote event to detail a dizzying array of new features for Multimodal Search (dubbed Multisearch), Immersive Google Maps, AI-generated summaries (of long documents or long conversations), and more intuitive voice assistant services.

Welcome to the Multisearch Universe

A month ago, Google rolled out a feature called Multisearch that allowedyou to combine elements in a single search query, like using a photo and text at the same time. At I/O, Google gave Multisearch a new local angle. Called Near Me, the feature lets you factor in your location while Multisearching, helping to sniff out local restaurants or shops based on photos and text. Multisearch Near Me will be available globally later this year, though it will only work with English input for now.

Summing it Up with AI

Google is building a compact, new feature into its services, from Google Docs to Google Meet. Soon, the very long doc you are composing or reading will come with a simple summary at the top, gathering what Google’s algorithms glean to be the key points. The “Cliffs notes” setting also works in Google Meet, pulling out the highlights of a conversation that you may have missed before logging in to a meeting.

The company is also releasing an enhanced conversational AI program, called LaMDA 2. Based on the prompts Google fed to it during the preview, you could use it to describe scenes from the bottom of the ocean, or help you figure out what to plant in your garden. The possibilities are endless.

Google has taken steps to make its voice assistant recognize more nuances of conversation and react accordingly. A new feature called Look and Talk, which is available exclusively on the Nest Hub Max, aims to make talking with a voice assistant less like shouting at a brick wall and more like a human conversation.

You won’t have to say “OK Google” anymore, because the system is designed to recognize when you’re directing a question at it. To do that, the Nest Hub Max uses its built-in camera to monitor how close you are to the device, which way your head is turned, and which way your gaze is directed. So it can detect whether you’re looking at the device and waiting for an answer.

The Assistant also allows for pauses in a query, in case you need a second to collect your thoughts. Just like talking with a real person! The company did not say whether Google Assistant will ever be capable of showing real affection.

Immerse Yourself in Google Maps

An upcoming feature in Google Maps is something Google calls Immersive View. It’s a sort of tricked out Street View that lets you swipe to move around in a CGI-rendered 3D space. It can simulate whole cities, and even the insides of offices and restaurants. You won’t see a 100 percent accurate rendering, because much of it is based on user photos and then filled in with an algorithm. Google says the feature will work on any smartphone and is rolling out in “select cities” this year.

The Pixel Watch has been anticipated ever since Google started making Pixel phones in 2016—likely even before that when Google initially launched its first, specialized operating system for smartwatches. Well, Google’s wearable is finally arriving.

Unlike the Apple Watch, it’s round! There’s a tactile crown, and it uses recycled stainless steel for the frame. It also features swappable bands, though these appear to be a proprietary strap system, much like Apple’s smartwatch.

Google says the Pixel Watch has fluid animations and an improved user interface that’s “tappable, voice-enabled, and glanceable.” You’ll find Google first-party apps on the watch, including a Google Home app that’ll let you control your smart home devices just by tapping the screen on your wrist.

Google’s latest A-series phone—the budget alternative to its flagship Pixel—will be called the Pixel 6A and it will cost $449 when it goes on sale in July.
Unlike its predecessors, which use a midrange Qualcomm processor to hold down costs, the Pixel 6A is powered by Google’s Tensor chip, the same processor inside the high-end Pixel 6 and Pixel 6 Pro. It’s an Apple-like move, echoing how the $429 iPhone SE is powered by the same chip that’s in the iPhone 13.

It also makes the Pixel 6A one of the most powerful Android phones for the money. The use of the same chip means Google’s bringing every software feature you’ll find on its flagships down to this phone, including Night Sight for better low-light photography, Real Tone for improved skin tones in photos, and Assistant Voice Typing for faster and more natural dictation.

There are even some new perks, like how you’ll be able to change the color of distracting objects in your photos instead of simply erasing them via Magic Eraser.
The Pixel 7 (and 7 Pro) will also be powered by the “next-gen Tensor” chip, which will add improvements to speech processing, photography, videography, and security. When these phones arrive, they will come withAndroid 13 pre-installed.

Coming on the heels of last year’s Pixel Buds A-Series are another pair of wireless earbuds: the Pixel Buds Pro.

These $199 buds have the same design as the A-Series, but Google has added active noise cancellation, to tune out your surroundings, and a transparency mode to let ambient sounds in.
The Pixel Buds Pro are equipped with touch controls, a case with wireless charging support, and an IPX4 rating for water and sweat resistance. Google says they’ll last for 11 hours per charge, or seven hours with active noise canceling turned on.
All of these features are bang on the money at this price. Spatial audio support is coming later this year. They go on preorder July 21 and hit store shelves July 28, and come in four colors: Charcoal, Fog, Coral, and Lemongrass.

Google’s new Pixel Tablet is not the first Android-powered Pixel tablet—that’d be 2015’s poorly-received Pixel C—but it’s the first one to arrive since Google started paying serious attention to the Android tablet experience.
The company has been making strides in optimizing the operating system for larger screens in Android 11, 12L, and the upcoming Android 13.

For this year’s grand finale, Google showed off a prototype set of augmented reality glasses that offer real-time language translation of whatever the person standing across from you is saying.

The glasses look completely normal, with slightly thicker arms. In the video Google showed off, the wearer is able to see a live translation from a foreign language show up in the upper corner of their vision as the person across from them was speaking. It’s unclear at what stage these AR glasses are at or whether they’ll ever materialize into an actual product. (Also, this is not the first time Google has teased a rosy visions of smart glasses’ future.)  [24×7] 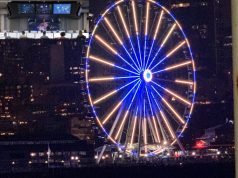