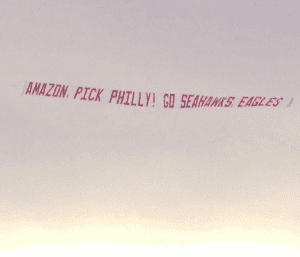 As the race to decide the new location of Amazon HQ2 comes down to the wire, many cities are making last-minute overtures, like Philadelphia’s sly, sky-high gesture combining its NFL contest against the Seattle Seahawks, a game the NFL-leading, number one offense team lost to the Seahawks Sunday night 24-10, with an otherwise good-willed, corporate “call-to-action.”

The Philadelphia Building and Construction Trades Council paid for a plane to fly around Seattle for three hours — at times passing over Amazon’s headquarters there — on Friday afternoon.

Some other cities among the more than 200 trying to lure Amazon’s $5 billion second headquarters are also getting creative.

While the details of what kind of subsidies and other kickbacks Philadelphia is offering Amazon remain secret, announcement of a short list of front-runners is expected early next year with a decision anticipated not long after that.

Originally, Philly organizers wanted their plane to soar over the Seahawks’ stadium in Seattle when they played the Eagles on Sunday, yet that idea never got off the ground due to NFL regulations.

Another proposal that nosedived?  An attempt to take out a full-page advertisement in the programs given out to fans in the stadium Sunday night.

“We were gently rebuffed by Seahawks management, because they said, ‘We here in Seattle are also in competition for the second headquarters, believe it or not, and we didn’t want to give Philadelphia any kind of competitive edge.”

Amazon has made clear  it is focusing on metropolitan areas with more than 1 million residents that can attract technical workers. The ideal location for its second home, according to the company,  would be a “stable and business-friendly environment.” [24×7]