“WE” the People — Standing Strong for Bridging the Story Gap! 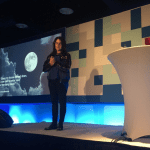 Several years ago, when then Melissa Waggener was in her 20s, she started the first female-owned PR agency. Anywhere. It happened to be in Seattle. Waggener and Pam Edstrom vowed to stay focused on two BIG things: Technology. And People.  The intersection of both led to one of their first and best bets: a skinny kid named Bill Gates.

The first months with their fledgling public relations client were spent “writing press releases at midnight, and driving through snowstorms on the east coast, trying to get the press in New York, Boston, DC—anywhere, really—to notice a small, new company called Microsoft, in a little-known industry called software.”

Today, the Waggener-Edstrom firm has rebranded as “WE,” and staffs 800 people in 18 offices around the world. Watch for our in-depth interview with Melissa Waggener on Technology. People. And Online Public Relations — this week! [24×7]

Doubling Down on Amazon HQ2 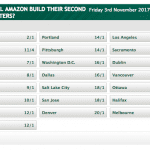 If placing a bet on the next city Amazon will choose for its second business headquarters, dubbed HQ2, is your pile of chips, Irish gambling site Paddy Power will lay you odds and take your money. The current “favorite,” at  3-to-1 is Atlanta, GA.  Austin, TX and Boston, MA are tied for the second and third positions at 6-1.

Amazon received 283 HQ2 proposals from cities across North America. In the U.S., there were only seven states where no cities placed a bid on HQ2: Montana, Wyoming, North and South Dakota, Arkansas, Vermont, and Hawaii.

The state of Washington submitted a letter to Amazon CEO Jeff Bezos, signed by more than two dozen legislators. “We are proud to have helped Amazon grow from a small tech startup to an international powerhouse. Let’s build on this historic partnership and continue to grow together,” they write.

An unabashed proposal from our state recommended 10 potential sites, five in each Washington county, where Amazon could build a $5 billion, 8-million-square-foot second headquarters. The proposed sites are in Arlington/Marysville, Auburn, Bellevue, Bothell, Everett, Kenmore, Lynnwood, Renton, Tukwila, and the Tulalip Tribes.  Amazon is expected to make a decision in early 2018. [24×7] 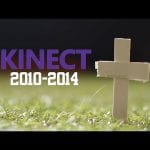 Microsoft puts the Kybosh on Kinect

Microsoft has ceased manufacturing Kinect, the device developed for its gaming console XBox 360 in 2010.  The original device created a new way of tracking people in 3D space and was used by not only gaming companies but digital health companies who found it an effective and low-cost tool that jump-started a transformation in physical medicine and rehabilitation.  A Fast Company article noted that Kinect demonstrated that companies could develop inexpensive depth cameras and helped advance the development of applications using depth sensing. [24×7] 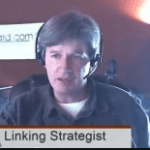 Known affectionately by friends and followers as “Link Moses,” Eric was given the honorary nickname more for his trailblazing spirit than for his age. His life’s work was coaching others in the role of authoritative, relevant link building, which is about cultivating industry-related backlinks to a Web property. To this day, and contrary to what you may have heard from Google, links remain the most vital, ranking factor for achieving high visibility for Website content.