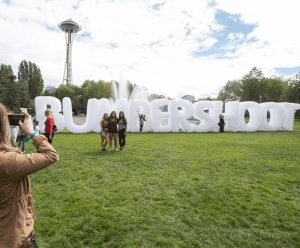 This year’s Bumbershoot continues its legacy of celebrating innovation and the search for what’s next in the multi-disciplinary art forms of dance, film, literacy, theatre, visual arts, and of course, music.

The name Bumbershoot was chosen both as a knowing nod of respect to our city’s most famous weather pattern, and a symbol of the overarching mission: to be an umbrella for all of the arts.

After the Flood, a Web Stream

A little-known fact about the star-studded musical lineup for this year’s festival is that some of the top performers have agreed to have their acts privately streamed to pediatric wards in medical centers across America, including Seattle’s Children’s Hospital, Johns Hopkins Medical Center, USC Medical Center, and the Children’s Memorial Hermann Hospital in flood-ravaged Houston, Texas, among others.

The Seattle-based Melodic Caring Project, which will provide the video production for the large screens concert-goers see above the Fisher Green stage during the live performances, will produce the Web streams. MCP’s president Levi Ware and vp Evan Blackstone work with the artists directly to send personalized greetings to the young patients, including, on occasion, immersive VR experiences to their hospital bedsides.

Through a live-chat feature, patients can chat throughout the concert with friends, family and outside supporters sending real-time messages of love and encouragement, creating a true sense of community and support.

In other leading-edge Bumbershoot tech happenings, Microsoft is bringing their VolvoxLabs project to Seattle Center. The design-driven, interactive studio blends rich visual content with art, code, fabrication and sound to create stunning, immersive experiences.  See how they’re keeping it surreal with Microsoft Kinect activated images.
The PlayStation 4 Truck will be pulling in to Bumbershoot. Swing by to check out the latest from PlayStation including PSVR & enter to win a prize pack.
Laser Dome at the Pacific Science Center returns to the festivities showcasing Laser Kendrick Lamar every day, plus some Laser Beyoncé, Laser Daft Punk, & more. 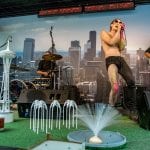 The pre-Bumbershoot excitement has even spilled over into downtown Seattle. Nordstrom’s flagship store has created a decorated window set for the incredible J GRGRY  who was performing LIVE at press time.
The 1 Reel Film Fest will be screening at Bumbershoot featuring over 40 short films including audience favorites from the Seattle International Film Festival.
For the younger set, Youngershoot at the Children’s Museum returns this year to offer a curated play space and programming for children ages ten and under.  And across town? PAX West is underway! [24×7]