Returning to Seattle for the fourth consecutive year, the eyes of the international gaming world are once again riveted on Key Arena as the main event of  “TI,”“The International” DOTA 2 Championships for 2017 enters the final phases of the penultimate championship.

With a prize pool of more than $23 million dollars, including a $10 million prize for first place, $3.8 million for second, $2.5 mill for third and over a million dollars for places 4-6, The International is Dota 2’s biggest (and esports’ most moneyed) competitive event.

The sold-out finals are the culmination of Dota’s year-long season schedule – all the Majors, third-party tournaments and roster shuffles, leading up to an 18-way showdown where all $23 million is up for grabs.

Fans can watch the entire tournament live online through Steam Broadcasting, YouTube, or Twitch. Real-time stats, graphs, and Steam chat are available as part of the DotaTV Live Streaming experience. You can also step into Dota VR Theater to watch live matches and replays in SteamVR. 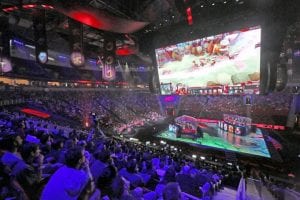 Fans can also watch the tournament for free on a huge LED screen on the lawn next to Key Arena. A Newcomer Stream is a special broadcast enhanced presentation with contextual overlays aimed at easing people into understanding the expansive world of Dota during the most exciting event of the competitive year.

This year, the following teams have advanced to the Upper Bracket of the Main Event: LFY, Team Liquid, LGD, Newbee, Evil Geniuses, Invictus Gaming, Virtus.pro, and TNC.
DOTA 2  was developed by Valve Corporation and released as a free to play game in July, 2013 for Windows, Mac OS and Linux. It is the successor to the very popular Warcraft 3 mod, Defense of the Ancients, which was based on the Aeon of Strife map for StarCraft.
The main objective in Dota 2 is to destroy the enemy Ancient inside their stronghold. These strongholds are protected by multiple towers down 3 lanes.
Instead of building armies of units like in classical RTS games, each player controls a single Hero, a strategically-powerful unit with unique abilities and characteristics which can be improved over the course of the game.
Experience is earned when nearby creeps and heroes die, and once collecting enough experience, the hero gains a level, which increases the hero’s stats, and at most levels the hero gains a skill point which can be spent to unlock or upgrade one of the hero’s abilities.

Alongside a hero’s fixed abilities, each hero has 6 inventory slots which can be filled with Items which provide various benefits and abilities. To purchase these items, Gold is gained passively over time, by killing creeps, by killing enemy heroes and by destroying buildings.

Dota 2 has an heavy emphasis on tactics and team co-ordination, and a deep amount of strategy focused on building up strength as fast as possible, optimal itemization, and selecting what order to upgrade your hero’s spells.