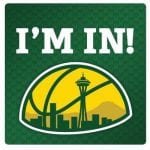 Back in 1994, my eldest daughter and I began making a frequent trek from our domicile on Bainbridge Island down the backroads of highway 305 and State Route 16 to a wooden dome roundly planted in Tacoma under the backdrop of Mount Rainier. It was there we could follow our beloved NBA franchise play out a season in a ‘home away from home,’  a sister city ‘backcourt on loan’ while an aging Key Arena was being renovated on Queen Anne.

Two years later, inside of a beautifully remodeled Key Arena complex, we witnessed the team’s historic march to the NBA Finals against the Chicago Bulls and the legendary Michael Jordan. The arena at Seattle Center was a showplace and the Sonics showed the world an amazing brand of team chemistry.

We were told at the time that the Ackerley family had a hand in deciding that the facility would not be built for NHL ice hockey for some proprietary reason. Still, we were mesmerized as we watched “The Glove,” Gary Payton, thundering Sean Kemp, “Big Smooth” Sam Perkins and international all-star Detlev Schrempf, among other stand outs, as they flexed their athletic prowess in a new home.

At the time, I was working as an advertising copywriter and was delighted to be asked by Werkhaus Design to contribute my ideas to a new Sonics’ season tickets brochure along with a new slogan, a “rallying cry” for the jumbo scoreboard suspended above center court.

“Breaking the Barrier” was the signature tagline inbounded for that season, a tribute to the team’s breaking new ground on a new arena and breaking through to the pinnacle of the NBA’s elite.

The newly styled Key Arena was streamlined and modern, featured a tiered, middle ring of luxury corporate “skyboxes” (which we were lucky enough to visit once or twice and snack on iced shrimp and other hors d’oeuvres during the season.)  “Not in My House!” became the new mantra.

A couple of years later, after the Sonics used the #1 NBA draft pick to enlist college star Kevin Durant, the rumblings about Key Arena began to take on overtones. Suddenly the “Key” was a kind of albatross. A building that simply would not work for NBA competitions (even though it had hosted an actual NBA World Championship)!

As a family, we were completely baffled. How was it that the same facility we were enjoying as season ticket holders could possibly be relegated to scrap heap status?  I sent an email to venerable Seattle sports columnist, Art Thiel, asking why, after reveling in so many exciting moments at the “Key,” it was being downgraded as wholly inadequate?

Art graciously responded, “It’s all about the players’ salaries,” he wrote.  NBA contracts were undergoing massive inflation to the tune of millions of dollars. That trend has continued unabated to present day!

Now Seattle is undergoing another arena incarnation between Seattle Center and SODO as the prospective, future home of a Seattle NBA and  NHL franchise. This week was the deadline for two of the factions to present their bids for overhauling Key Arena once again. The contestants are the AEG and Oak View Group led by former AEG CEO Tim Leiweke.

Seattle Mayor Ed Murray had previously said the city was not interested in Key Arena as an NBA/NHL arena site, but that later changed, and the city issued a request for proposals in January to redevelop the arena.

As GeekWire has observed, “Key Arena isn’t far from South Lake Union where thousands of Amazon, Facebook, and eventually Google, employees work everyday. The site is a traffic challenge on a daily basis, and could be even more so with an NBA or NHL game drawing thousands more people done there every few days. Any decision on an area is sure to affect the tech industry from a quality of life and traffic standpoint.”

To create more room for a full ice rink and concourses in the arena, the Oak View Group proposes digging down an additional 15 feet, a move Leiweke says will dramatically increase the project budget. OVG’s plan also includes building an 800-stall parking garage and eight loading docks on the south side of the site.

You can read OVG’s executive summary here. The firm notes that it will “incorporate the latest technology to facilitate pre- and post-event fan communication.” 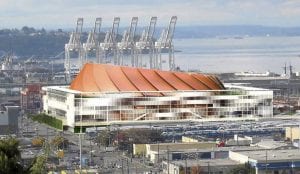 AEG and Hudson’s $520 million proposal calls for a 600,000-square-foot facility. Seattle Coliseum does include some “public financing concept,” Daniels reports, but the team says it will not seek new taxes or existing public capital from the city. It will also invest $5 million to “accelerate existing transportation strategies” around the arena.

You can read AEG’s executive summary here. It noted that it will invest $5 million “to accelerate existing transportation strategies around the arena and create a shared mobility hub adjacent to the arena,” adding that “The Seattle Coliseum will be fully connected into Seattle’s transportation infrastructure, and the arrival of Light Rail will integrate seamlessly into the facility.”

The two proposals are also completing with another location entirely. The city is still evaluating a proposal from Chris Hansen to build a new arena south of downtown near Seattle’s other major arenas, CenturyLink Field and Safeco Field. 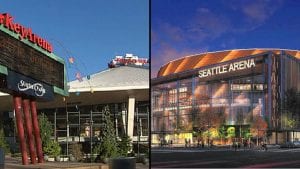 The City will review the proposals for Key Arena and recommendations will be delivered to the mayor in June.

Perhaps Seattle sports can once again break the Sound barrier. A breakthrough is needed to solve the pressing issues of congestion, transportation, parking and corporate sponsorship — and how to generate enough revenue to pay the stratospheric salaries of entire teams of multi-million dollar athletes. For that barrier to be broken, Key Arena, SODO and Seattle sports fans have waited far too long. [24×7]