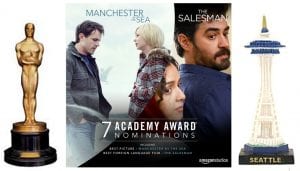 Putting this year’s “Best Picture” envelope fiasco aside, before the Academy of Motion Picture Arts & Sciences could bungle the announcement for the evening’s “Best in Show” feature, three Academy Awards (Best Actor and Best Original Screenplay for Manchester by the Sea plus Best Foreign Language film for The Salesman) went to a Seattle-based company that is better know for delivering packages than Oscar-winning performances.

Amazon Studios acquired the domestic rights to Manchester By the Sea for $10 million, (outbidding Sony, Universal, Fox and Lionsgate), when the film debuted at the Sundance Film Festival in 2016. However, the way the company handled the marketing of the picture showed extra Hollywood savvy.

Netflix was snubbed at last year’s Oscars for Beasts of No Nation, largely owing to the fact that so few people (older Academy voters) could see the movie in theaters. Because Netflix pushed for a simultaneous release, the four largest theater chains in America — AMC, Cinemark, Regal, and Carmike Cinemas — all boycotted the film. It didn’t matter that Netflix subscribers could watch the movie in the comfort of their own homes. The theaters are still the gatekeepers for prestige movies in a real way.  Amazon played its cards right.

Choosing an online partner like Amazon to back a film also means deep pockets. Woody Allen went to Amazon to make Café Society, abandoning his usual partners Sony Pictures Classics, because the company could provide the bigger budget required for a 1930s-set Hollywood drama.

This far, Amazon’s approach has been to work with established independent filmmakers. There was Spike Lee’s Chi-Raq in 2015, followed by Whit Stillman’s Love & Friendship, Nicolas Winding Refn’s The Neon Demon, Todd Solondz’s Wiener-Dog, Allen’s Café Society, and Jim Jarmusch’s Paterson this year. In each case, Amazon partnered with a theatrical distributor to release the films nationwide before premiering them on Amazon Prime a few months later, where they can be streamed for free by subscribers.

The Amazon approach has worked, earning a total of six Oscar nominations this month for Manchester by the Sea—Best Picture, Best Director, Best Actor, Best Supporting Actor, Best Supporting Actress, and Best Original Screenplay.  “Unlike Netflix, Amazon has built up a reputation in terms of prestige because it gives its films actual theatrical runs, rather than treating the cinema experience as an afterthought,” said The Atlantic Monthly’s David Sims.

Oscar telecast host Jimmy Kimmel reminded one member of  the audience, CEO Jeff Bezos, that should Amazon win any of the Oscars they were nominated for, they would receive them in 2-5 business days, unless stolen first by a rogue GrubHub delivery person.  Kimmel also gave a shout out to Amazon’s personalized shopping features and the Oscar-winning movie’s somber tone. Kimmel said. “You know, if you search for ‘Manchester by the Sea’ on Amazon, it says ‘customers who bought this item also purchased Zoloft.’” [24×7]