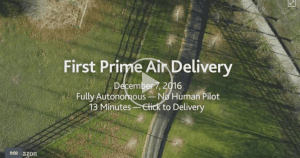 “That’s one small step for Amazon. One giant leap for drone delivery of e-commerce packages worldwide.”

If you’re tracking Santa’s path on NORAD this Christmas, make sure you are not following an Amazon delivery drone on your radar transporting a holiday movie and a bag of popcorn.

Amazon has announced the first commercial Prime Air delivery in its history to an actual customer. The dispatch occurred by drone aircraft, meaning without a human pilot, and delivered a Fire TV device and a bag of popcorn to a house in the English countryside, all within 13 minutes of receiving the order.

The Amazon-built quad copter, part of the Prime One Air fleet, can be seen in a video floating over green farm fields before nestling down onto a lawn and dropping off the package.

Amazon will be making its drone-delivery service available to customers who live within a few miles of a facility it built to test deliveries.

The proposed use of drones may drive down the cost to deliver small packages crosstown to as little as $1, a fraction of existing same-day delivery options, according to a 2015 study by New York-based ARK Invest that tried to quantify the savings from the use of drones compared with delivery trucks and couriers.

According to Bloomberg Business, Amazon faces competition in the U.S. from startups like Flirtey, which in July made its own household delivery via drone from a 7-Eleven store in Reno, Nevada. Flirtey co-founder and CEO Matt Sweeny envisions customers paying a fee of about $10 for the convenience of quick drone delivery, and is experimenting with the convenience store chain on delivering over-the-counter medication, which could appeal to parents of sick children.

Project Wing, a unit of Alphabet, which also owns Google, experimented with dropping off burritos to students and other test subjects last September at Virginia Tech in Blacksburg, Virginia.  In an ironic twist, Google announced this week that it is dropping out of the fully driverless car race according to a lengthy report on tech media site The Information.

While routine commercial drone flights have been approved in the U.S., they’re not allowed over people and must stay within sight of an operator on the ground. Until companies can prove to the Federal Aviation Administration and other regulators around the world that radio links, collision-avoidance technology and guidance systems are reliable and safe, widespread deliveries won’t be feasible. [24×7]