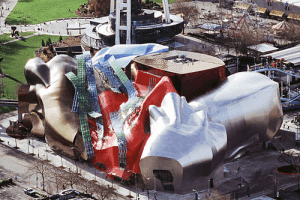 The sprawling, shape-shifting, Frank O. Gehry-designed building huddled below the Seattle Space Needle has always defied being type-cast. Its fusion of textures and colors, from its undulating, gold contours to its flowing capes of metallic red, silver and blue and shimmering, Jimi Hendrix-style “purple haze,” to its jutting film-like strips of blue and green, is a metaphor for multimedia in architecture as well as art.

This week the museum’s original soundtrack will officially “cross over” to other chart-topping forms of popular culture. Like the sublimely curated content and artists it has come to represent, EMP will morph from music, costume, sci-fi and fantasy exhibits to contemporary culture in its many forms. On tap for 2017-2018 are artifacts and photographs associated with Jim Henson, David Bowie and cartoonist Rube Goldberg, to name but a few.

The evolution of this amoeba-like space has been progressing for some time. Between the bands and bandwidth of rock and roll music and science fiction, the museum has presented fine art, film, fashion, video games, black leather jackets and even gone inside the hearts and minds of Seattle sports fans.

Curatorial director Jasen Emmons said museum founder Paul Allen views himself as a catalyst who wants to launch projects and step back to see if they can stand on their own.  Allen has reeled back financial support for the multi-mission museum he founded at Seattle Center, according to the Seattle Times.  Excluding depreciation, Eastlake EMP produced a surplus of revenues over expenses for 2015 and 2014.

MoPOP will open its doors this Saturday, November 19th, for a Pop Culture Party that from 10am to 5pm and it’s free! EMP encourages attendees to RSVP in advance on their Facebook page. Mark your calendars for Saturday and check out this list of planned activities that are all-ages friendly:

• Free admission to all EMP galleries, including Star Trek: Exploring New Worlds and World of WearableArt™

• Fandom Photo Hunt that will take you and your squad through the museum on a quest to up your selfie game and interact with some unexpected characters in immersive scenes inspired by Harry Potter, Star Trek, Stranger Things, Game of Thrones, Ghostbusters, and more