Who among our elected officials will reach across the aisle and show they are working together?

That’s the essential question being asked by Seattle-based Reunite U.S., a grassroots movement that is tired of the negativity of the election season just concluded and is asking elected officials to show they can work across the aisle.

“We are asking our elected officials to get together with an opponent or someone with a different opinion, listen to each other, maybe share a cup of coffee, and find something in common to work on. Then take a selfie of the meeting and post it to the Reunite U.S. page,” announced the site’s Facebook page. 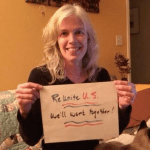 Is this a promise to get things done?  Well, the site admits, it’s a show that there is a willingness to start the process.  Getting together won’t take long – but it will send a clear message.  This will help to Reunite U.S.

If you are an elected official, Reunite U.S. invites you to show you are willing to commit at: www.facebook.com/reuniteus2016/

The site will track who signed up and who got together. They asks the pols who meet for coffee, (Starbucks not required). to take a selfie and post it on the Reunite U.S. Facebook page.

If you are a voter and your elected officials have not committed, you can ask them to participate with a letter on the following page: www.facebook.com/notes/reunite-us/send-a-note-to-your-candidate/1678567555805556

Reunite U.S. estimates that 87% of eligible US voters want a peaceful transition of power and want government to work again.  Although Reunite U.S. is focused on Washington State, any elected official is encouraged to cross the aisle and post a selfie.