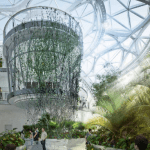 As the world braces for climate change,  the Paris Climate Agreement becomes a reality, and the critical role of business moves to the forefront, the Seattle Metropolitan Chamber of Commerce has brought local solutions to light– Bright Green in an Emerald City – in a report detailing examples of Seattle business leadership and tangible progress by its membership.

“We still have a long way to go but it is increasingly clear that we can stop the worst impacts of climate change even as we grow the economy,” said Seattle Metro Chamber president and CEO Maud Daudon. “Business leadership is critical since it helps put to rest the false choice between a strong economy and a healthy environment. We can and must have both,” she added.

“Our business depends on fuel, so it’s logical to make our fleet as efficient as possible and to invest in new sustainable biofuels to power our planes,” said Brad Tilden, CEO of Alaska Airlines and chair of the Seattle Metro Chamber’s Board of Trustees. “We feel a strong sense of responsibility to help find solutions and demonstrate what is possible,” he added.

Some of the Report’s ‘Bright Green” highlights:

•  PSE is preparing for the closure of two coalfired generation units at the Colstrip Generating Station in Montana and moving toward a cleaner energy portfolio for customers in the Puget Sound region. These plants are the oldest at Colstrip, which is the nation’s 15th largest producer of greenhouse gases given its size. Under a recent proposed legal settlement, the two units will be shuttered by July 1, 2022. 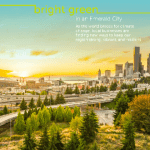 • Microsoft’s business divisions pay for carbon emissions associated with their energy use and air travel. Those funds are then dedicated to improving the company’s energy efficiency, buying renewable energy, recycling electronic waste, and funding community projects that reduce and offset carbon emissions. One recent initiative was to buy the first validated and certified carbon offsets in Washington state, protecting 520 acres of old-growth forest in the Nisqually watershed. This forest sequesters carbon and provides important habitat for owls, murrelets, and Chinook salmon.

• Amazon’s new 3-block development, known as Rufus 2.0, was designed by NBBJ. The design includes three high-rise towers that reduce energy use by having natural ventilation from operable windows all the way up to the top. At 37 and 38 stories, the new towers will be the tallest office skyscrapers in the Pacific Northwest with this rare feature. One of the blocks has a set of innovative spheres that will be filled with a lush assortment of over 25,000 trees and plants representing more than 300 different species. These plantings are blended with workspaces where employees can meet, work, and think in a more relaxed setting. Plants are being gathered from botanical gardens and universities like the UW, which see the spheres as another place where threatened or endangered plants can be preserved and thrive

• Virginia Mason’s Seattle Hospital and Medical Center achieved a 60 percent reduction in waste from food prep by applying “lean” efficiency principles in their kitchen. As cooks prepare the food, they put food scraps into clear plastic bins where the scraps can be seen, measured, and tracked. With 1.2 million meals served per year, the hospital was able to prevent 14 tons of food waste with the program—saving food and money, while keeping methane out of the atmosphere.

While the report focuses on stories of progress, society still has a long way to go in the fight against dangerous climate change. The United States is the second largest carbon emitter in the world, after China.

To preserve a chance of keeping average temperature rise to less than 2 degrees Celsius, the United States committed in the Paris Climate Agreement to reduce its carbon emissions by 26-28 percent below 2005 levels by 2025. Under any scenario, business leadership is required to meet this objective.