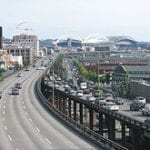 Seattle’s double-decked Alaskan Way Viaduct that has elevated traffic along the Elliott Bay waterfront since 1953 is once again in transition.  Connecting our Boomtown sporting arenas with tony Belltown, the skyway will officially be closed for the next two weeks, causing traffic tie-ups across metro-land as drivers look for alternate routes.

Thankfully, there is a mobile solution for keeping friends, family and business colleagues alerted if you find yourself running late.

The free mobile app named Glympse  can let those waiting for your arrival know where you are for up to four hours. Those on the waiting end simply open your private link in a mobile or web browser (no downloads needed) to see your movements on a live GPS-powered map, including your ETA.

Glympse reduces the need for the “when will you get here/there?” text messages or calls, offering greater safety as you battle city traffic to the Mariner’s, Seahawks or Sounder’s home games. 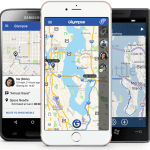 Since there’s no need to create an account to use the service, login and password hassles are eliminated. Once downloaded, you can “glympse” anyone you choose by simply selecting a contact or contacts. Choose the duration you want your location to be available to the recipient, and then hit send.

Glympse uses patented location-sharing technology that allows users to set a timer for how long their location may be shared, from a few minutes to up to four hours. A sender also has the ability to “pause”, “cancel”, or ” extend a Glympse session at any time. The “auto expire” feature eliminates the need for users to manually turn off location-sharing and unintentional broadcasting.

On the receiving end, anyone with an Internet-enable mobile device or email access can receive a Glympse and view your whereabouts turn-by-turn, in full interactive fidelity. The recipient receives an SMS or email message with a unique URL that can be clicked to open browser with a map, pinpointing the sender’s precise location.

With Glympse, you do not need to join a new social network or go through a cumbersome set-up process that requires you to find people with the same phone and service then seek permission to share location with each other. The sender is the only one who decides when they will share their location and with whom and for how long. Once the Glympse expires, or “times out,” that’s it. The only way a recipient can see your location again is if you send another Glympse. You can also “pause” or “cancel” a Glympse at any time or choose to extend it for up to another four hours.

Glympse co-founder Bryan Trussel  spent 16 years leading teams at Microsoft, working on a range of products from Windows to Interactive TV and embedded systems to casual games, including creating and launching several V1.O products, like MessengerGames, Windows CE and Xbox Live Arcade. He currently resides in Redmond, Wash. with his wife, four daughters and four-year-old son, clearly a tech solution-finder who wants to to keep his family informed if and when he is stuck in traffic. [24×7]