Can Seattle’s industrious lead on the basepaths of Internet technology spell an offline advantage for the stalwart Mariners each time they take the field in the 2016 major league season?

We’re not talking the FitBit, Nike Fuelband or Jawbone. Neither will the Apple Watch or Android Gear make an appearance at home plate anytime this year. They are all currently MLB-prohibited.

Two wearable devices have been approved by Major League Baseball, provided they are used for post-game analysis, and not for realtime bio-feedback. During games, MLB players can wear a Motus Baseball Sleeve to keep tabs on elbow stress and the Zephyr Bioharness heart and breathing monitor.

Both the sleeve, which measures arm exertion and stress levels, and the harness, a suit capable of reading the physiological data of a player, have been approved as baseball “wearables” this year.

According to Engadget, “The idea is to use the sleeve and heart-rate sensor for early injury detection by tracking a player’s habits. Details on a pitcher’s throwing motion during a game could be used to prevent serious injuries that lead to procedures like Tommy John surgery. To help ease privacy concerns from the player’s union, all of the gathered data can only be used internally and will be shared with the player.

Microsoft partnered with the NFL in 2012 to make Surface’s the official tablet of the game. For 2016,  Apple has formed an agreement with Major League Baseball for all teams to be able to use the 12.9-inch Apple iPad Pro tablets, equipped with a customized MLB Dugout app to deliver extensive scouting information, analysis and video.

The league and Apple developed the app after last year’s testing of iPad Air 2 tablets with select managers and coaches.  Here again, the tablets must be in “airplane-mode” once the umpire shouts “Play ball!”  During games, the tablets cannot be connected to the Internet or stream live video. Any data to be used must be loaded from  network connections installed during the offseason in all home and visiting clubhouses. 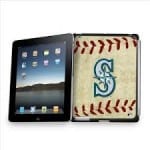 The Mariners scouting assistant, Emanuel Sifuentes, oversees the team’s advance reports which are sent to each player over iPads they were all provided early in camp. Players can digest as much information on opposing teams’ pitchers or hitters as they want prior to each series or game.

Hitting coach Edgar Martinez will be able to show hitters information on relief pitchers who are coming into a game and bullpen coach Mike Hampton will be able to update relievers on hitters they might be facing.

“I think it’s great to have the ability to take the technology in the dugout and be able to use it,” first-year Mariners manager Scott Servais said. “What we have access to is not much different than having a three-ring binder. But having an iPad and getting all our scouting reports, we’ve really amped up a lot of our advance scouting reports.

The MLB rules committee also approved two batting swing sensors for on-field use during workouts from Blast Motion and Diamond Kinetics. However, those two devices still cannot be used outside of warm-ups, batting practice and other training sessions.

While some may welcome the use of tech on the diamond, not all players are fans of the change.

“The next thing you know, the pitcher’s going to have a phone in his pocket taking selfies,” Yankees outfielder Brett Gardner told the Associated Press.  [24×7]