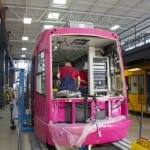 Like a burst of color springing to life after a monochromatic rainy season,  Seattle’s color rainbow has come to life this Spring in the form of a carousel of new streetcar colors, thanks to an increasing ambulatory workforce.

The colored passenger trolleys fan out across the Emerald City like the NBC peacock.

Hot pink is for Capitol Hill, reflecting the color of “Seattle modern energy,” at least according to our new public streetcar “visual vocabulary.”

The newly manufactured streetcars now beginning to roll out on Seattle city streets were actually imported from the Czech Republic company known as Inekom Trams, but not without Seattle civic engagement. The city’s contract included a local jobs initiative in the bid process. As a result, the Seattle Department of Transportation (SDOT) was left with the painting of the streetcars creating a visual color code for the trolley neighborhoods in the process.

What colors are being spilled onto the avenues and thoroughfares of Seattle?

Sky blue is the streetcar for First Hill hospitals, in homage to the babies and maternity wards found there. Red and yellow

adorned trolleys are painted for the Seattle’s International District, the traditional colors of China, and green for Little Saigon. South Lake Union has seen its streetcar colors turn orange — Amazon’s corporate color. The color gold was chosen for Pioneer Square in honor of the Klondike Gold Rush of 1897-98.  And for Capitol Hill?”  Why, pink for the “modern energy” of the neighborhood.

The first completed tram for the First Hill Streetcar — sky blue — completed a 600-foot ride on Friday morning, shuttling just a small number of passengers testing for the system moved into full motion.  According to sources, “It only required one ‘reboot.’”

“This is another step in our efforts to get streetcars running throughout Seattle,” passenger and Mayor Ed Murray said to the media assembled to cover the event at the system’s International District maintenance facility.

When service begins, the First Hill Streetcar will have ten stations along a 2.5 mile route from S Jackson and Occidental to Broadway and Denny Way and will connect Pioneer Square, the ID, Little Saigon, First Hill and Capitol Hill. The project will cost somewhere around $130 million before all is said and done. Sound Transit is footing the bill as part of mitigation for being unable to construct a First Hill station as part of the U-Link light rail project. That project along with Capitol Hill Station is slated to open in early 2016. The streetcar’s current northern terminus will deliver riders to Broadway and Denny — across the street from Capitol Hill Station.

A plan to extend the streetcar and the bikeway north on Broadway to Roy by 2017 is underway. Meanwhile, the city is working to better optimize Seattle’s first streetcar route as the SLUT has seen a downtick in ridership as traffic in the corridor it travels has caused a slowdown in service.

Fares will be set by the Sound Transit board. The South Lake Union line’s adult fare is now $2.25. First Hill Streetcar fare is “anticipated to be similar to Link Light Rail and Metro peak hour fares.” Riders without ORCA cards will be able to purchase tickets at fare box machines located on station platforms.

Hours of operation will be 5 AM to 1 AM Monday to Saturday and 10 AM to 8 PM on Sundays and holidays. “The streetcar will run at 10-minute intervals during peak hours (Monday through Friday 6-9 AM and 3-6 PM), 12 minutes midday and Saturdays, and approximately 15 minutes at other times,” according to this FAQ. [24×7]